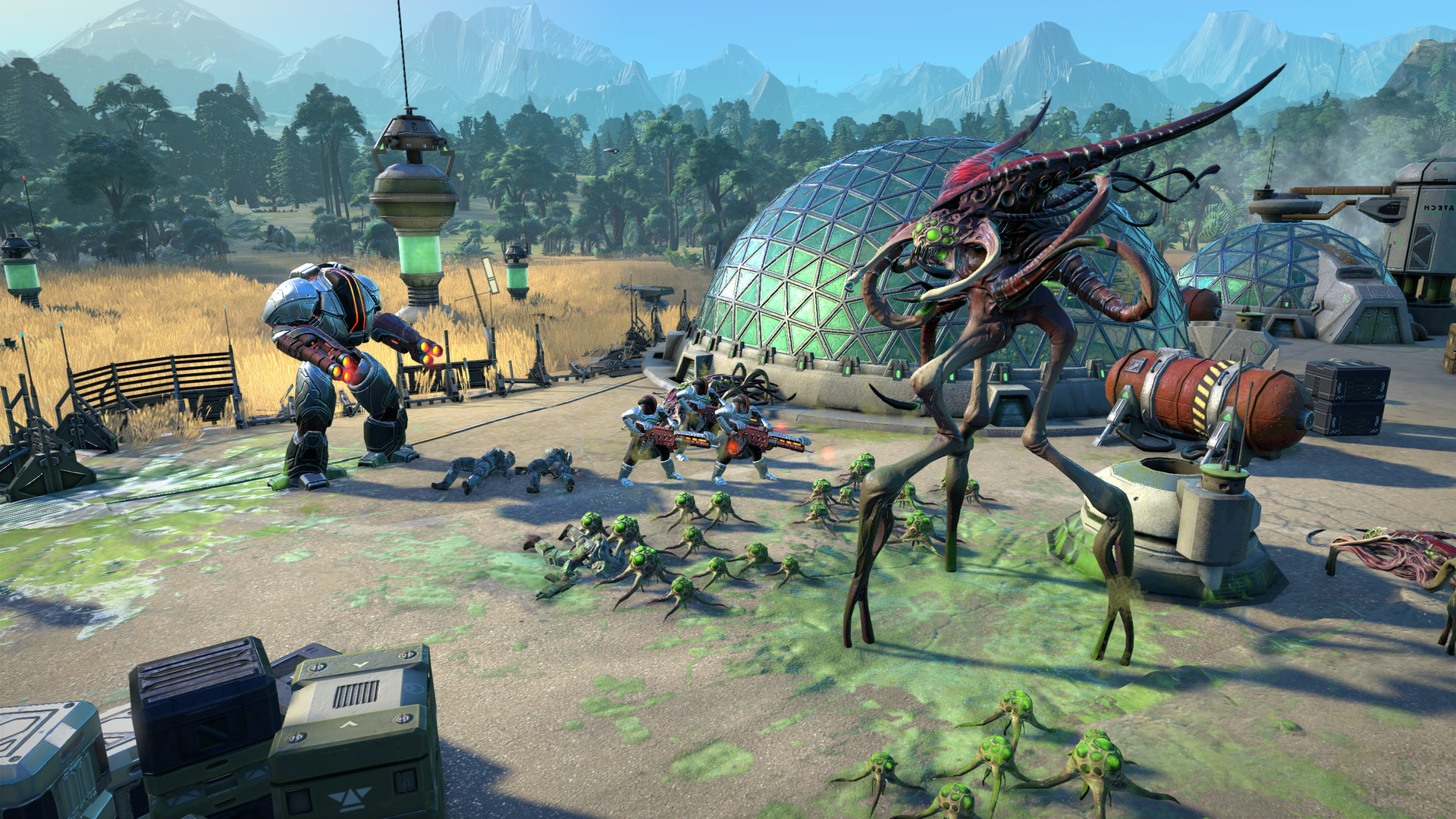 Taking the 4X fantasy style into space, Age Of Wonders: Planetfallfeatures enough changes from the previous games that returning players and beginners may need a little help getting into the groove of planet conquering.

Just getting started on your rise to power? Our full tips guide below shows you how to explore, expand, exploit, and exterminate on any difficulty level.

Even if you are a genre veteran, it's worth browsing through the tips below so you know exactly what structures and units to start with for the biggest advantage in the early game. Let's get started! 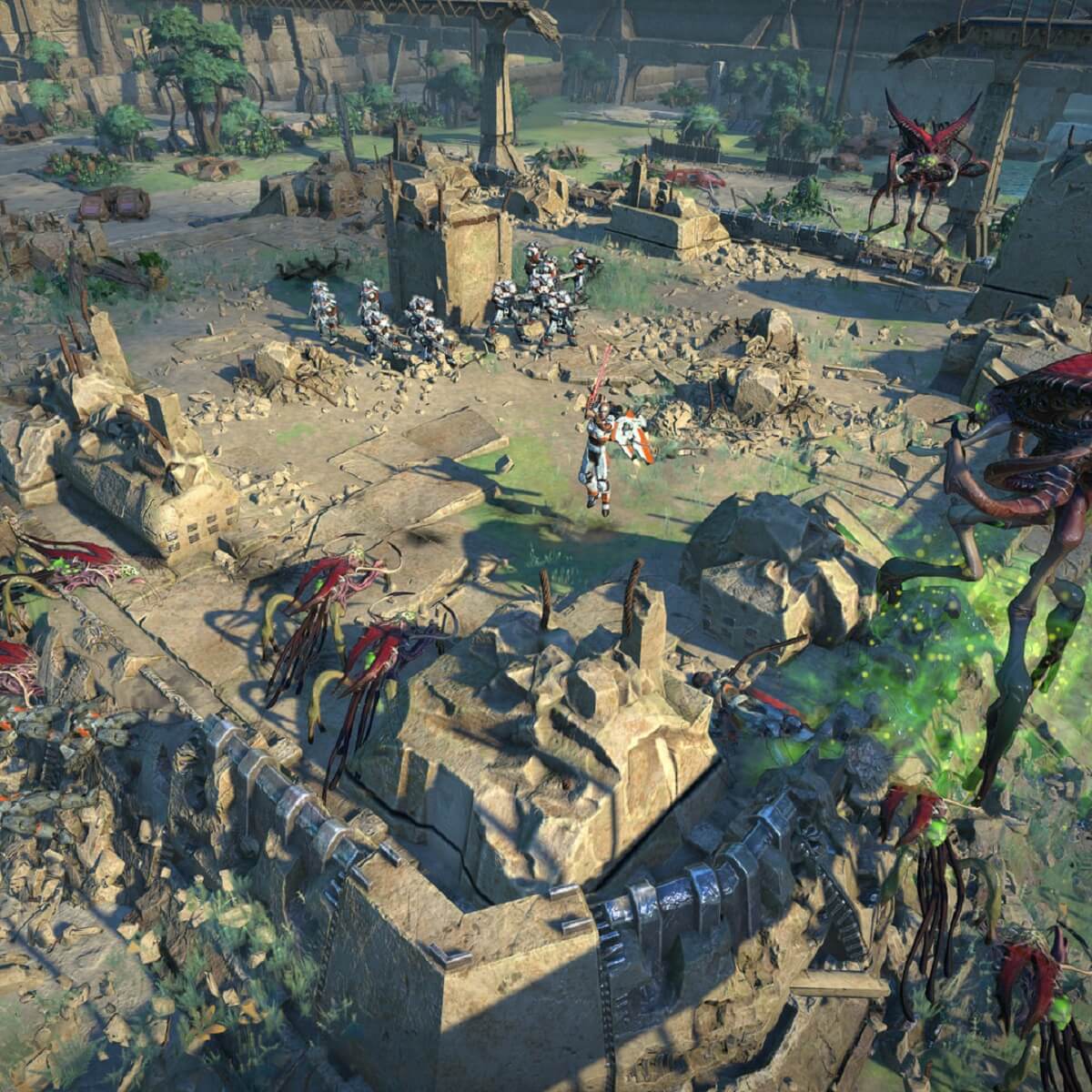 Before amassing a huge army, you need to make sure your citizens are content so they don't start a rebellion at home.

Here's the catch: population happiness automatically declines at a rapid pace by default. It does so until you build a structure that reverses the trend and increases happiness.

You don't want to get caught in a situation where production plummets and riots break out just as you need new armies to defend against strong enemy factions encroaching your borders.

In some missions and scenarios, you will automatically start with a ready-to-build Recreational Dome. You should build it on the first turn if possible. In other situations, you will need to research Frontier Facilities first in the Society research tree.

These are the three main options for increasing happiness in a colony, and where to research them:

After pumping out a happiness-increasing structure, your next order of business before upgrading anything is to quickly produce several low-level units so you can replenish your main army, defend your capital, and scout for undefended resources.

This is a bad idea. Don't do this.

In Planetfall, there is the constant temptation to pack your strongest hero full of units and stomp across the planet leaving a trail of destruction in your wake.

In the early game, it seems like you can easily overpower everything, so you'll want to amass as much territory as possible. Absolutely do not do that, even if it appears there are no enemy armies close enough to threaten your structures.

Other factions will take advantage of the fact that your strongest armies aren't at home, and you will quickly lose more territory than you gained.

In the early rounds, a single unit on a city will keep other factions away. As you start to hit turns in the mid double, however, you need to place full stacks with attached heroes as invaders will start trying to take your colonies.

While defending and upgrading your capital, don't forget to build colonizers in the unit production list so you can get new cities up and running for extra energy income and more military units.

Send Out A Scout To Pick Up Undefended Resources

While many of the resource nodes, caches, and various structures are defended by NPC armies, you can find undefended resources strewn across the far corners of any map.

To get an early edge, send out a single unit with high movement points to explore and pick up whatever is unattended.

Some factions have an early Strategic Operation available to summon a unit, which frees up your capital to build a happiness structure and other armies.

If that's not an option in your current scenario or you are playing a faction without an early summon, immediately produce a cheap scout unit with high movement or flying such as the Shrike (Amazons), Inspector (Assembly), or OWL (Vanguard).

Together with sending out an expendable scout, there's one change to how you play that is absolutely critical when establishing the edge against other players and getting ahead in the arms race: always set your research and unit production at the BEGINNING of the turn, before you start exploring.

You may get production and research boosts by taking over resource nodes or finding caches, which will effectively complete your production or research that same turn for free.

If you set your production at the end of the turn instead, you rob yourself of the ability to get instant completion and effectively put yourself behind in the race to expand.

While you need a steady influx of energy, research, and production to keep pumping out higher-end units, influence can actually become the most important resource to manage.

Every map features one or more of the following NPC factions that operate independently of other AI players: These factions aren't out to conquer the map, but they do own locations and will sell you units and mods as you increase your relationship by completing quests or offering tributes.

Here's why that's important: you can spend influence to buy high tier units without having to spend any energy or wait multiple turns for the creature to be produced. Units purchased with influence appear at your capital immediately, with no wait time, which can tip the balance in any battle.

For instance, when you reach the Friendship relationship level with the Psi-Fish, the Tier III elite Siren unit is available for only 80 influence, which is much cheaper and faster than producing an equivalent unit at one of your colonies.

Plan For Your Victory Path Early

While campaign missions have specific victory conditions based on the storyline, randomized maps are instead won through total conquest, unification, or destruction (euphemistically referred to as 'purification').

If you are going for either of the latter two options, you need to plan ahead, as both options must first be researched.

The Planetary Unification Protocol can be researched early by unlocking Dawn Of A New Union on the top Doctrine branch of the Society research tree. It takes longer to implement than the destruction option, however, and comes with these major restrictions:

To go this route, you need to play defensively and only expand where there are hostile marauder armies that don't belong to any faction.

Researching Planetary Purification takes far longer to initiate, as it's found at the very end of the military research tree, although it has no restrictions and is much easier to implement.

If you want to go this route, keep in mind that all resources are culled by 30% during the 10-turn countdown for purification, so plan accordingly, as you won't be able to build as many units while all of the other factions mass to annihilate you before you can wipe out life on the planet.

Have any other tips for new players to get up and running quickly? Let us know your favorite strategy in the comments below, and stay tuned for our full guides on navigating the research tree and picking the best Planetfall hero skills coming shortly.

Be sure to check out our review of Age of Wonders: Planetfall to see why we said it 'triumphantly propels the series into a sci-fi future.'