The fine folks at 11 bit and Dead Mage announced that Children of Morta, the indie gem they released last year, is getting a new DLC that will raise funds for one of the largest animal protection organizations in the world.

Dubbed Paws and Claws, the new Children of Morta DLC is now available on all platforms and costs just $4 / €4. According to publisher 11 bit, all proceeds from the charity DLC will go to Humane Society International.

The Paws and Claws DLC adds an entirely new section to the universe in which the Bergsons live in. The most important is the new animal shelter system that will become available as a new section of the house. More importantly, a herd of varied animals will now visit the family's house, including deer, fox, birds, and more.

Also, a new mechanic will be added, which will allow Children of Morta players to use treats to feed animals and look after them. Of course, new special animal-related boosts, such as XP gain, movement speed, and more, will be available for the Bergsons. 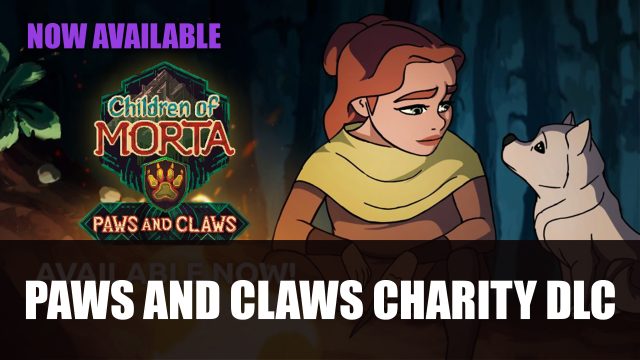 “Paws and Claws is the kind of content that embraces the meaningfulness that we’re often pouring into our games. Animals are a big part of the original Children of Morta story, so enriching relationships with them in the game felt natural. And collaborating with an organization like Humane Society International perfectly fits 11 bit studios’ mindset since we believe that a company producing meaningful games should also act meaningfully,” said Karol Kała, Producer of Children of Morta.

With Paws and Claws, developer Dead Mage is adding more than 11 new animations, big and small, showing players the life of their new animal friends. Last but not least, new home interactive events that involve various animals will trigger within the game.

Along with the release of the Paws and Claws charity DLC, 11 bit announced the availability of the Treasure Pack, a free update that includes new content such as 6 new Divine Graces, 8 new Consumables (Talisman of Protection, Iron Hide, and more), and 12 new Divine Relics (Burning Edge, Ferocious Shards, Wand of Protection, and more).

Children of Morta (2020) is an action RPG with a rogue-lite approach to character development, where you don’t play a single character – but a whole, extraordinary family of heroes. Hack’n’slash through hordes of enemies in procedurally generated dungeons, caves and lands and lead the family of Bergsons.

Children Of Morta Paws And Claws

Here you can find working trainer for Children of Morta Paws and Claws (latest version 1.1.70.3+). Currently we have free cheats from MrAntiFun/WEmod and ColonelRVH.