Description Demetrios is a quirky adventure game packed with tons of humor! Bjorn Thonen, a slob of an antique dealer living in Paris, is robbed one night after coming home drunk. Forced to conduct his own investigation with the help of his neighbor Sandra, he ends up involved in a murky, mysterious affair. 'Demetrios is well-paced, well-told, well-drawn, and well-wrapped together' 8/10 - GameGrin 'A great addition to the collection of any comedy adventure game lover' 4/5 - KickstartVentures 'Whoever wanted to permanently help a bunch of completely underexposed idiots out of trouble, is totally right here' 81% - Adventure-Treff. ' Demetrios - The BIG Cynical Adventure ' is now available on PlayStation Vita!

A downloadable Demetrios for Windows

Demetrios is a quirky point & click adventure game inspired by classics like Broken Sword, packed with tons of humor!

Bjorn Thonen, a slob of an antique dealer living in Paris, is robbed one night after coming home drunk. Forced to conduct his own investigation with the help of his neighbor Sandra, he ends up involved in a murky, mysterious affair. Will these unlikely heroes be able to rise up and discover ancient secrets?

The game offers situations and puzzles for beginners and experts alike, with a high degree of interactivity. Explore ridiculous item combinations, just to see what happens!

All purchases include a DRM Free version + Steam key!

'A well written 'big' adventure game that's fun to play. There's enough diversity within the game to hold the interest of most players.'
'B' rated on Just Adventure

'Demetrios is a superbly made game, the first in a long time that really had me hooked' Indie Game News

'Whoever wanted to permanently help a bunch of completely underexposed idiots out of trouble, is totally right here.' 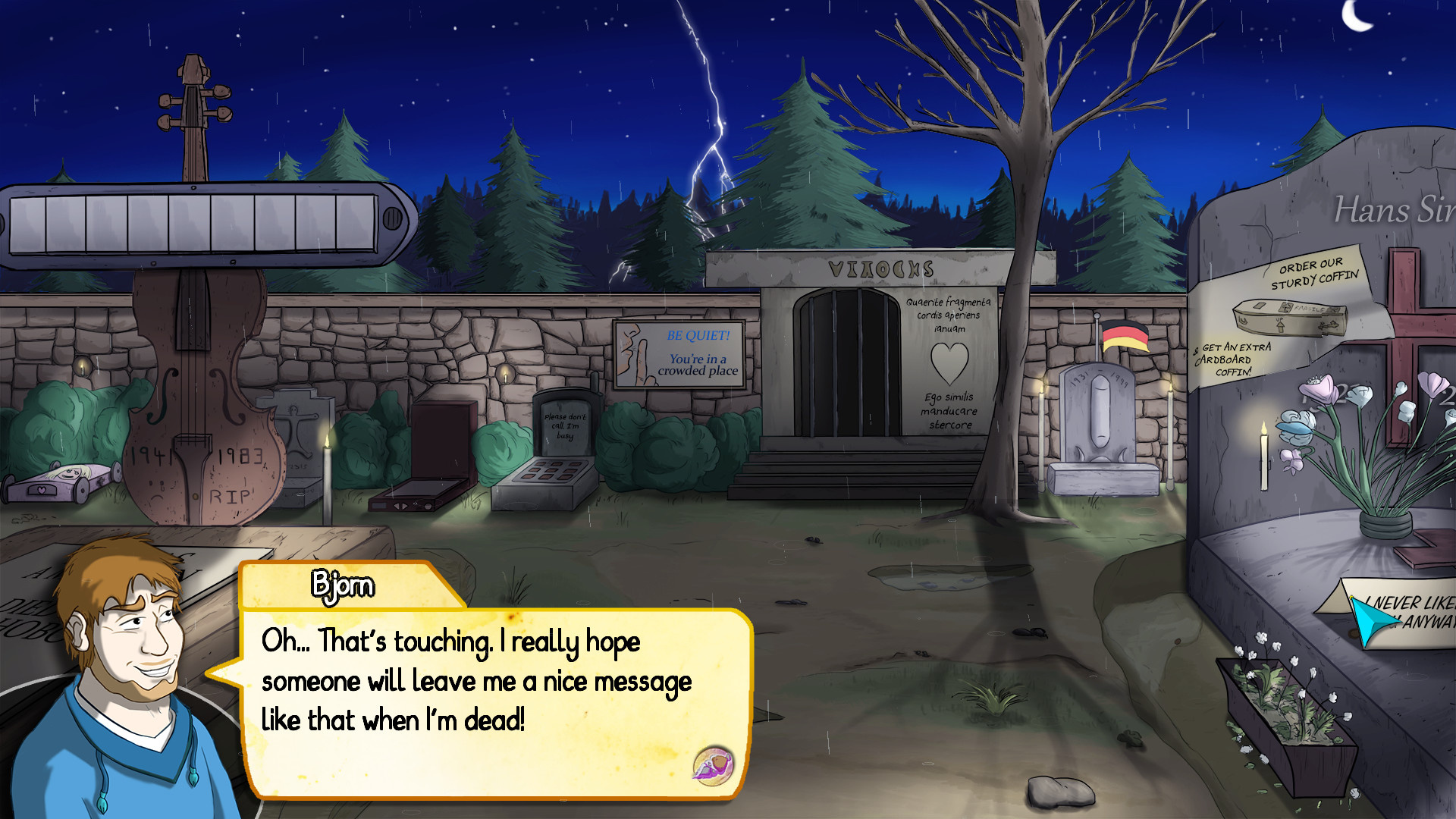 1.2.1 : Mac and Linux are updated to 64 build in order to keep running with their respective upcoming OS versions! (no change required for Windows)

In order to download this Demetrios you must purchase it at or above the minimum price of $9.99 USD. Your purchase comes with a Steam key. You will get access to the following files:

I just bought the game and zero problems getting the Steam key :)

I love that it can be played on any platform :D

Hi, some people are redeeming Steam keys so there must be a way - admittedly I'm not sure how myself considering itch.io doesn't consider I own the game. Maybe ask them? Worst case I could send you a key manually.

Today I've updated Demetrios on Steam and other DRM Free builds for 64 bits (Mac and Linux) The Mac version is now a .dmg for easier install.

No change required on Windows! (which explains the version difference)

I'm trying to open it on my Mac and nothing's happening :/ I also tried going into package contents and opening the executable file directly but that didn't do anything either. Am I doing something wrong?

EDIT: running the executable file indicates this file is missing:

I haven't updated the files since almost 2 years (but maybe no one tried the Mac version?) For some reason itch.io won't let me download my own game XD So I can't check.

But can you re-download it and check the content of the package? That file should be there. I've checked my latest package and the file was inside.

Of course if you're running the executable directly without extracting everything, it won't work. If I remember correctly, normally you simply have to double click on the downloaded file and it should install. (but admettedly, I rarely use a Mac and my memories from two years ago are fuzzy)

Worst case scenario, you can get a Steam key, for which the Mac version definitely works.

Yeah this was all after I extracted the ZIP download. I only tried running the executable directly after the original file wouldn't work. I tried redownloading a few times and I keep getting the same error.

Let me know if I can get a Steam key instead!

That's weird, maybe the latest Mac OS updates broke something. You checked that you allowed 'unknown sources files' in your OS settings? (can't remember how it's called exactly)

You should be able to get a Steam key with your itch.io purchase! Can't you?

Yeah, I went on settings and allowed the file to run despite being from an unknown developer. It still wouldn't load.

Oh my bad I didn't know you can get a key from itch.io. I'll go do that now, thanks! 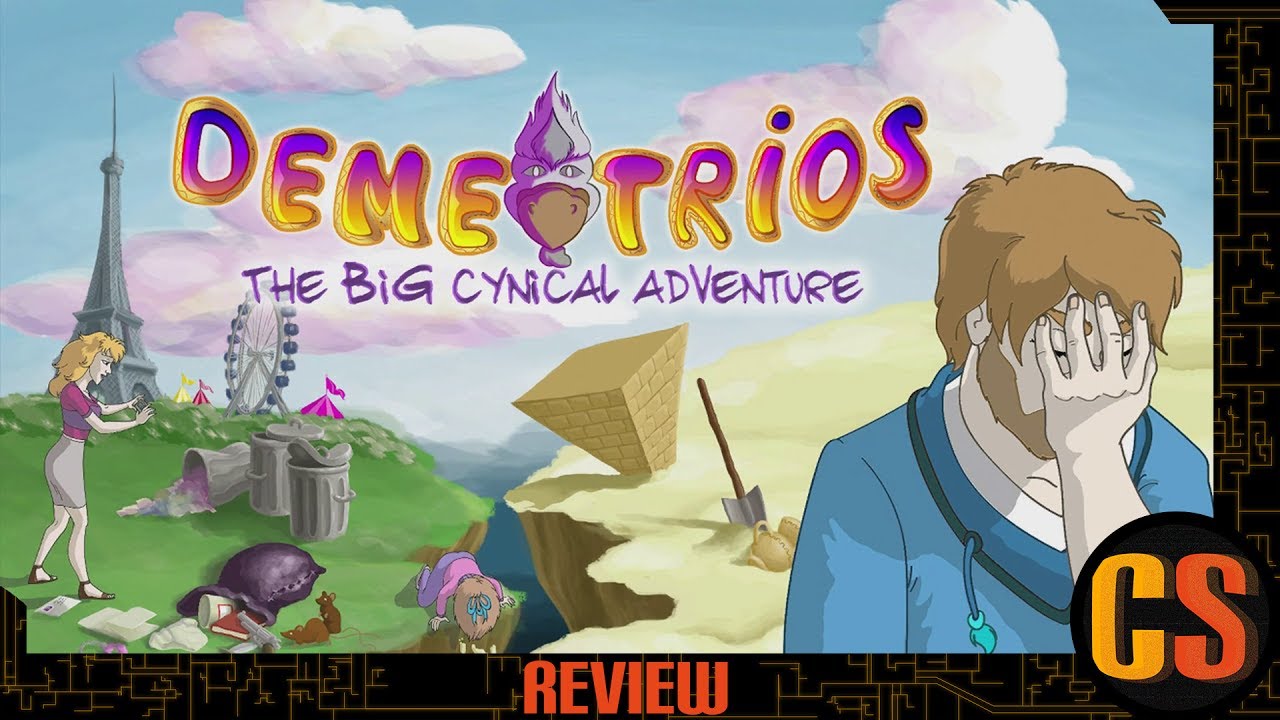 thank you! also thanks for such a great game, I good lost in it all day today :)

I've been working for 2 years on a new, very ambitious adventure game, I'm doing dev streams every day if you want to take a look : https://www.twitch.tv/cowcatgames

Most of the game has been programmed and most dialog written (and it's a huge game!) but with 90% of placeholders for art/music. Currently trying to make it so we can play from start to end.

No public demo yet (because of the placeholders art) but if you're interested to be a beta tester, I'll probably start looking for some in 6 months so be sure to check me on Twitter where I post my news : https://twitter.com/COWCATGames

Hi Fabrice would I be able to become a beta tester for Brok!

where are the save games located? im on linux mint, thanks!

Hmm, I believe it should be in a /.config/Demetrios directory inside your /home directory. At least according to GamMaker'sdocumentation : https://docs.yoyogames.com/source/dadiospice/002_reference/file%20handling/file%...

I'm not a big fan of P&C but after playing around with the demo I had to buy it, this is fantastic, no issue with it running on Linux mint as well. Thank you so much for a wonderful game. 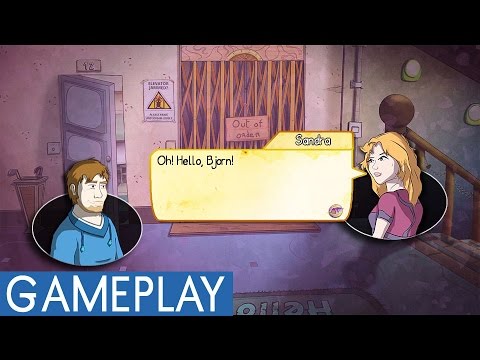 Forgot to link to my full review of this highly enjoyable game:

Albeit I didn't have the opportunity to the play the version with the less pleasant bits taken out (didn't enjoy the toilet humour!)

Thanks and there's always time to replay the game with that option!

Finished it now after 10 hours and am quite satisfied :-D It's very polished (I have encountered no bugs or crashes), the story is entertaining, the puzzles not to hard, there are some nice minigames - one can see that there was much love put into this game. Only the jokes/the dialogues got a bit enervating over the time, especially towards the end it became very disgusting - too much pissing, pooping, farting and vomiting ;-)

But besides that it was fun and kept me interested the whole time :D

About toilet humor, that's why there's a choice to filter it when starting the game ;)

I'm not too big on point-and-clickers, but this game's the rare exception. It reminds me of old school P&C games in its presentation and execution.

Graphically, everything's bright and colorful. The soundtrack's easy on the ears, although it can get a bit repetitive after a while. Controls... well, it's a point-and-click game.

There's really not much I can say here that hasn't been said in the video. Very nice game!

Thank you very much for the video review :) I'm glad you liked it!