Sep 7, 2019
A guide that reviews basic information and strategies of the six characters.
Other Dicey Dungeons Guides:

Dicey Dungeons is a rogue-like adventure game in which you battle your opponent's using action cards and a battle mechanism that relies on the luck of the roll of a dice. In this dicey battle game, you can choose from a selection of characters with their own cool special traits to help you in battle.

There are currently six different classes to choose from in Dicey Dungeons. They are as follows:

Each of the characters have unique abilities and attributes that allow them to perform powerful moves that suit their playstyles. The six classes are described in further detail in their respective sections.

⭐
I'm here to have fun and fight monsters! Back home, I love working out, long walks on the beach, and working out!


The Warrior is a class that focuses on two main abilities: high-damage and self-shielding. Its primary ability, the Sword, is a basic damage-dealer that can defeat low-level enemies with ease. As the player progresses, they gain items similar to the Sword, however, they also apply various effects (Freeze, Shock, etc) on the enemy when a 6 is used. Combat Roll gives the Warrior numerous opportunities to either roll high numbers or values that can be transformed into desired numbers via utility equipment such as Spatula or Bump.

⭐⭐
I'm not here to make friends. I'm here to win. Everyone else is too, of course - they're just lying about it.


The Thief is a class that prefers utility equipment rather than just straight-up damage. It starts the game with two items: the Dagger and Lockpick. The beginning of the Thief's run is typically the most difficult as you cannot roll too high (you cannot insert anything into the Dagger) or too low (the damage isn't enough to get a quick kill). Upon reaching level 3, the game becomes a lot easier as you can start creating a solid build.
Tips:

⭐⭐⭐
BEEP BOOP, HUMANS! Haha, just joking. I can definitely talk. I love colour-coded to-do lists and pushing myself to the limits.

The Robot does not roll dice naturally; instead, it rolls its own dice using its special ability, Calculate. Calculate generates a usable dice and fills the CPU counter. The Robot does not have unlimited uses of the ability; if the CPU counter exceeds its limit, all equipment will be destroyed, however, if the player is lucky enough to hit the exact limit, they will receive a special bonus. The Robot is very similar to the Warrior is at relies mostly on straight-up damage and, occasionally, shields. Some abilities are based off of the number of dice summoned from Calculate or relate directly to the CPU counter itself.
Tips:

Oh wow, this place is so cool! The doors! The spotlights! Oops, sorry, I mean, thanks for having me on the show! 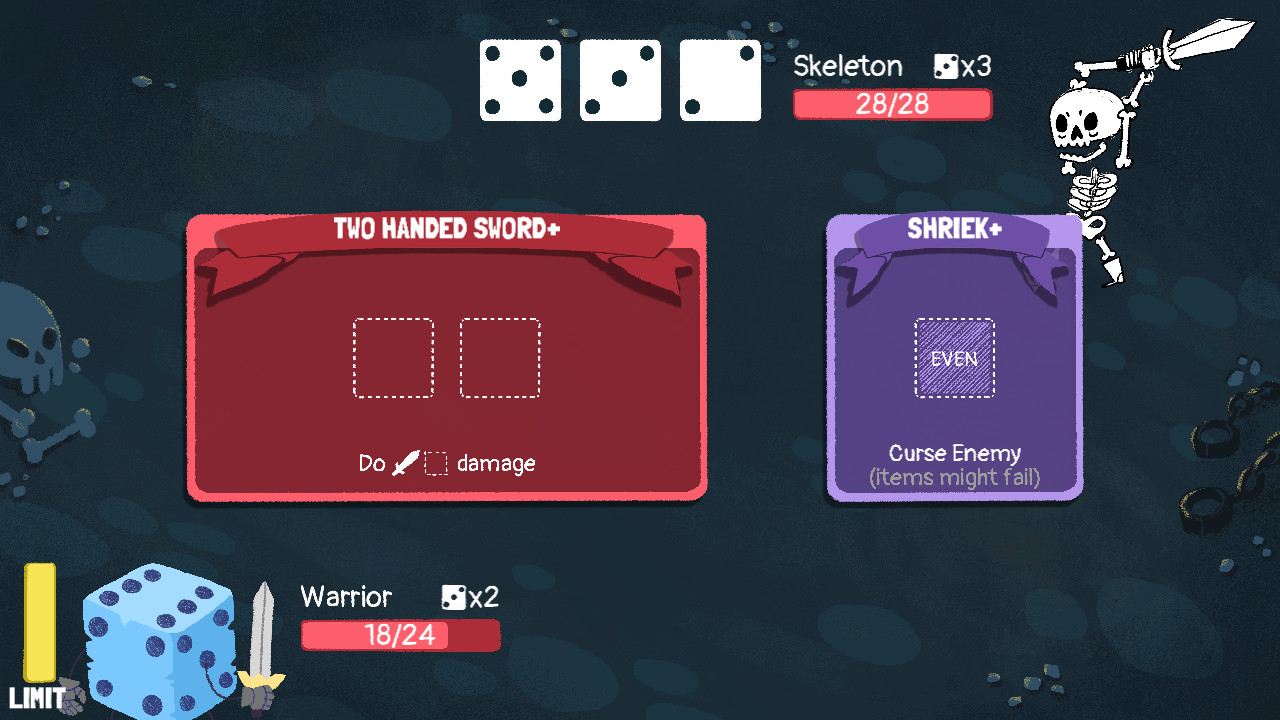 ⭐⭐⭐⭐⭐
Hey, everyone! I'm #blessed to be going on this amazing adventure with you. Don't forget to subscribe for updates.


The Witch works in a very different way than the first four characters; rather than organizing equipment in six-slot inventory, the Witch gathers six different spells for her spellbook. Each spell is assigned a numbered slot, and they can be summoned by using a dice on the spellbook. The player can choose from three primary spell paths to base their build on: Freeze, Shock, or Burn.
Tips:

⭐⭐⭐⭐
You may remember me from all those fights where I was a cool enemy! But I'm glad to be a giant fighting dice now. This is fine.


The Jester has a very interesting mechanic. Rather than having the ability to choose the layout of his inventory, the Jester gathers cards for a deck and draws them at random (however, you will be able to see your next three cards). Upon reaching level 2, the player will choose from 2 decks to create their build from. Each of them has a different them, including Freeze, Burn, Poison, etc. Throughout the run, you will have the opportunity to destroy any cards that don't fit your deck while also collecting cards that do (shops and booster packs always match your starter deck).
Tips: