Do you find yourself searching through the countless new animes to watch each season? If that's the case, then you've probably played at least a couple visual novels at some point, especially since some of them are so much like anime. And if you're interested in anime and visual novels, then Ethereal Enigma might just be the game you should look forward to playing. So if you like games like ATRI - My Dear Moments- then check this one out. 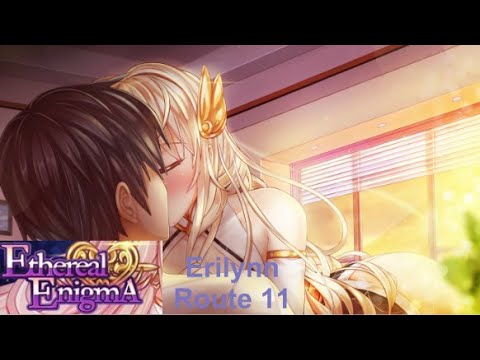 Not so common daily life

Ethereal Enigma is, at its core, a slice of life visual novel, that centers on a protagonist who's starting the first day of high school. The very first day, on his way home, he meets a strange old woman who encourages him to make a wish at the local shrine. Our main character is a little skeptical at first, but what the heck, he tries it anyway. Upon his wish, he accidentally summons Erilynn, a beautiful princess from a different world!

If high school wasn't enough to worry for our protagonist, now he also has to try and keep Erilynn's identity a secret while trying to send her back to her world. But as he makes friends and starts to build relationships at high school, this becomes harder and harder. Now finding the mysterious old woman has become a priority.

In Ethereal Enigma your choices are super important, and this makes most walkthroughs different. You pretty much create your own story, following the basic plot of the game of course. This is not only a visual novel, but it's also a full-blown relationship simulator. There are many characters you can interact with and start building relationships. But in every aspect of the game, your decisions matter, and the game really does make you take a lot of them.

A world full of life

I think one of the things that could make this game stand out from a lot of other visual novels is the general aesthetic it has. It's super clean and fresh, and it features Live2D technology. This means that the characters are all seamlessly animated naturally and smoothly. The characters really look like straight out of an anime movie, and that's just beautiful. Not only that, but there's a full English voice cast, not only for the main characters but also all of the other side and extra characters are fully voiced.

Ethereal Enigma is a great way to take on the indie visual novel world, it has a lot of characters and an interesting story. Sometimes visual novels allow you to make decisions, but usually, they feel like following only a few different paths inside the same story. I think they managed to make it feel as if every decision matters here, and that's excellent. The fully voiced characters make it feel alive, and the animation in the sprites is natural and smooth.

The use of Live2D Technology for the animation is something more visual novels should start using. It's a more stress-free way of animating your characters and it ends up getting excellent results. The plot is funny and interesting, and there's even a mystery to be solved in Ethereal Enigma. It's exactly what it promises to be, and that's great!