[My initial impressions of Goodbye Deponia are here. But little changed from the game I started with to the game I ended with.]

Goodbye Deponia is the third and final installment of the Deponia trilogy. In this traditional point-and-click adventure, Rufus, our lame-brained anti-hero, sallies forth on his continuing mission to escape his home world of Deponia and ascend to Elysium, where the other half lives an existence hashtagged with nothing more serious than first world problems. 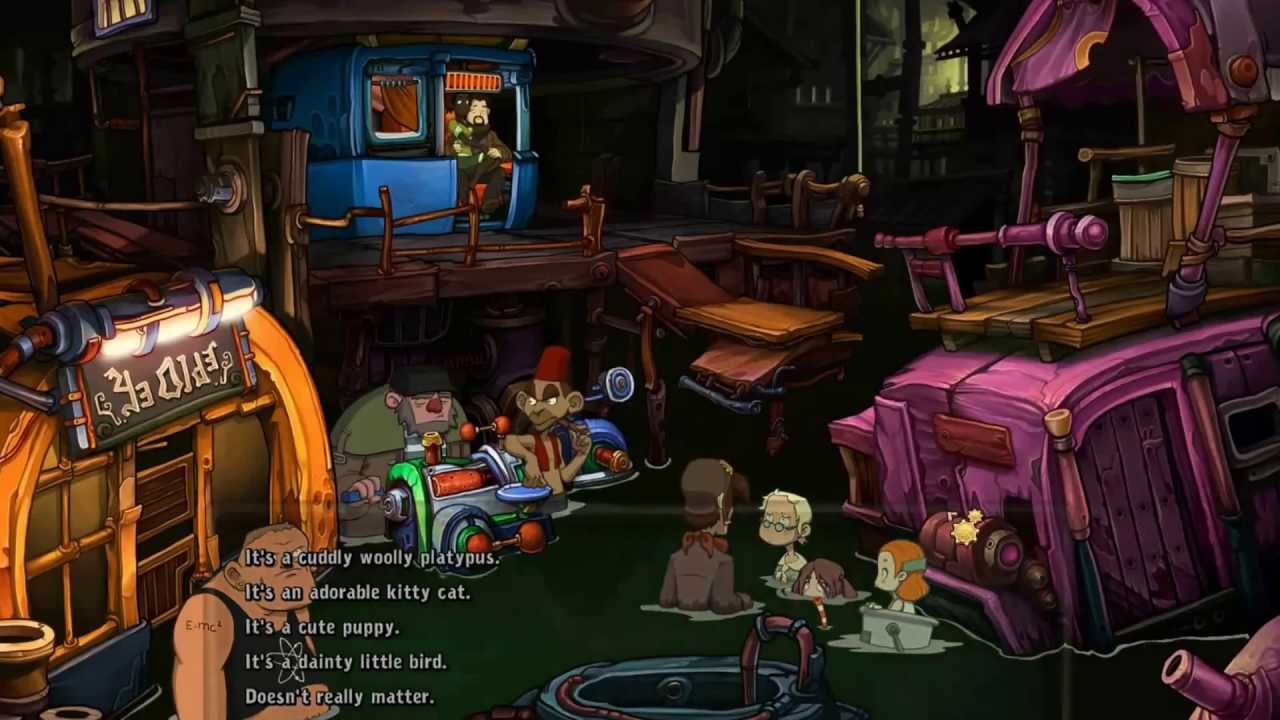 Goodbye Deponia is the third and final part of the Deponia trilogy and directly continues where Chaos on Deponia ended. The player takes control over the chaotic inventor Rufus - an egocentric person with little regard for people around him - who wants to escape the garbage dump planet Deponia.

Unfortunately, Rufus is too busy stepping all over himself to actually reach his goal. Which isn’t to be confused with “Goal,” the name of his so-called girlfriend that descended from Elysium in a previous episode. Ultimately, Rufus's motivating force is to live with Goal up in the silver-lined clouds above. His motivations are bald faced and childish on the surface, but his sojourn, as a whole, might be one of hope: hope to rise above the conditions he was brought up in, hope to spend time with the woman he’s falling in love with, and hope to -- just once more -- have a chance to save the day. 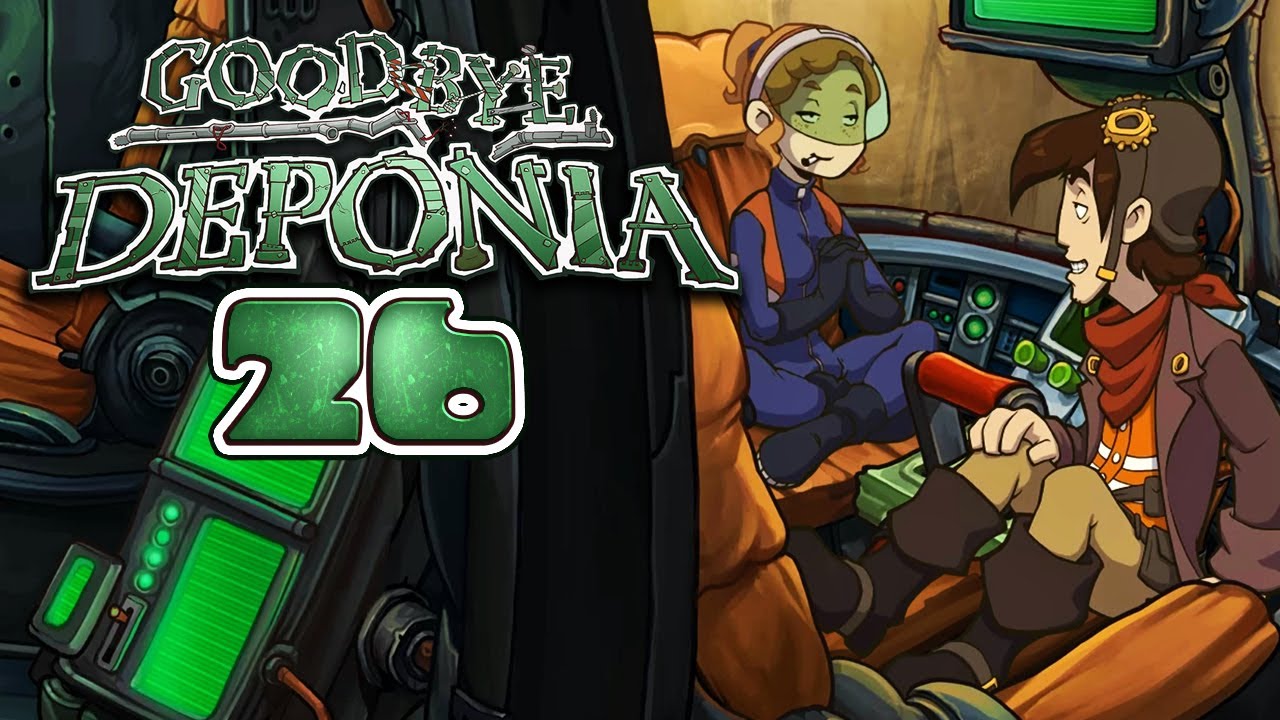 Don’t let that high-minded thought fool you, though. For better or worse, Goodbye Deponia is, beginning to end, a juvenile walkabout. Rufus is one of the most intentionally unlikable protagonists ever created. He resists reason, embraces idiocy, is narcissistic to a fault, and completely jerks around his friends but is, at worst, merely plucky with adversaries. The more predictable his idiot maneuvers got, the more I just shook my head.

His adversaries are the Organon, a totalitarian regime designed by German guilt and running on police-state principles. The Organon cruise above the trash-heap surface of Deponia on massive monorails, goose-stepping around in fuhrer-gray uniforms, and barking orders at each other through robo-static mouthpieces. They’re the guys you can point at and say, “There’s the bad guy,” but that’s a gray area as well. Rufus's rival is an inspector named Argus. There's a lot of baggage to unpack there that I can't spoil for you.

The pacing is nicely mixed and matched as Rufus traverses his beautifully hand-drawn world. Some scenes whip by with action-game efficiency. Other scenes slow down with a dozen hot spots and half a dozen other puzzles to piece together before moving on. He pockets nearly anything that isn’t nailed down, throwing two cents’ worth of commentary into every action, while you click about the environment for objects to interact with and people to verbally spar with. The only difficulty in its puzzles is in trying to reason with why you’re doing something in the first place. Rufus’s overarching goal, of course, is to reach Elysium. Why he’s trying to talk this guy into wearing a bathrobe, or talk that guy out of an outhouse, however, is the real mystery.

The scenery also flips around nicely. One moment he’s on a monorail, sailing over Deponia’s garbage heaps. The next, he’s waist deep in the sewers below the markets with a few orphans in tow. He’ll run into characters he’s previously adventured with -- all of whom want to avoid him like the plague -- and run into longstanding rivals that bear an eerie physical resemblance to him. When it comes to staging, Goodbye Deponia’s artists have a fantastic eye for light, shadow, color, saturation, spacing, and whimsy.

All throughout, you’ll be dealing with the usual adventure game shenanigans of combining random items together in your inventory, and clicking on random items in the environment, all the while hoping to make some kind of positive connection. Most of the puzzles themselves make sense only when you take into consideration the absurdist world Rufus lives in. It’s a state of mind that takes some getting used to. As a player, you’ll have to comprehend the fact that making Rufus do something stupid is often how the story progresses. You’ll have to be okay with doing dumb, inadvisable things and saying unspeakable things in order to get to the next chapter. I have to admit, I more or less resigned uneasily to the practice, never truly getting any enjoyment from sending Rufus into more and more chaotic situations and circumstances, all because the mouse clicks and options gave me no other choice.

The puzzle variety is nice. Some are timing based, and some are based on stealth and avoidance. Some require switch panel memorization, while others involved the ol' getting-lost-in-lookalike-corridors trick. So, the art is gorgeous and the puzzles are neatly laid out -- even when their context is obscure. But the writing’s sense of humor makes a lot of things hard to appreciate. Like the casual racism from voice actors that give the one Asian character an “ahhhh-soooo” accent. Or the one Spanish lady you run into has a thick Mexican brogue and sells burritos. There’s the needless sexism where Rufus states that animals can be useful just like women. Then there’s a disgusting scenario where Rufus goes into a child molester’s unlit van and then starts “choking” the “petting zoo animals” the creeper supposedly had. I'm not here to censor anyone's ability to make racist and sexist jokes. But these were poorly written and lazily executed. That's what I'm censoring: bored writing.

And yet, there are times when the comedy works when Rufus’s douchebag voice inflection doesn't constantly kill the punchlines. There’s a scene where you walk into a colleague’s childhood home, and his family and living room are set up like a TV sitcom, and there’s a laughtrack in the background all of a sudden that hollers and applauds at all the unfunny jokes (which makes the scene genuinely funny).

But it was the big reveal about Rufus’s origin story that marginally -- but maybe just marginally enough -- changed the tone of the writing. Finally, after finding out why Rufus has a blatant disregard for pretty much everything, then the jokes shifted and began to appreciate the comedy going on in each situation, rather than Rufus simply standing around, stroking his ego, high-praising himself until all life from the dialogue’s humor was beat to death and bled dry.

Also, in the Things Goodbye Deponia Gets Right category, are the musical interludes. Between chapters, a shabby, hobo-ish bard strums a guitar and bleats out great little musical vignettes. There’s also some breathless rapping that’s so bad it’s good. The musical segues are totally great.
Reading Goodbye Deponia off the page is different than playing Goodbye Deponia on the screen. There are some truly thoughtful moments to consider. There are some truly funny jokes told on occasion. There is an original story unfolding. It's just all waylaid by nonsense context and absurd reasoning and an inconsiderate protagonist and an often meandering story arc.