this is a guide to one of the MANY ways of completing hiveswap: act 2! there are tons of ways to do each and every section, but here is a resource for some things to try if you’re having a bit of trouble or just want to see what others have done. best of luck!

okay! I made a previous post about the post-trial game and i also made a recording of me playing through everything… but the music was too loud to hear me talk : . so, i’m just going to make a full write-up of what to do because i have literally nothing else going on. as a little disclaimer, there are multiple ways you can go about things in this game. if a choice seems inconsequential and you want to make a different one, go for it! i’m a text post, not a cop. this is just the way i did it, and you are by no means obligated in any way, shape, or form to follow my actions to the t.

WARNING: spoilers. kinda obvious, but some stuff is gonna be spoiled! i highly recommend only looking at parts you need to know as to keep everything fresh! i’ll do my best to be secretive about actual game info, but i’m writing this warning before the actual walkthrough so i don’t know how successful i’m gonna be. that being said, here goes!

– talk to the trolls outside the diner
– try to go in 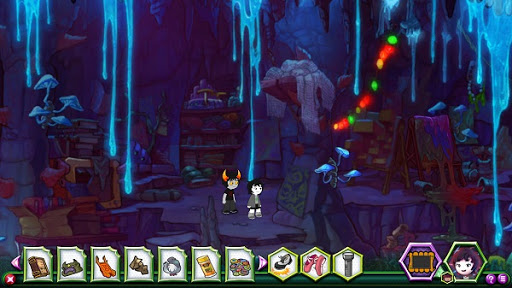 – walk into the cave
– after xefros puts the spoon on the table, leave the cave
– check the trash pile for the horns
– go back into the cave
– exit the cave to the far right
– try to enter the forest to the far right
– try to enter the house
– switch to xefros and use telekinesis on the door
– inside, use telekinesis on the big yellow book on top of the shelf
– switch to joey and read the book
– select the newly learned bee dance (far right in the hotbar at the top of the screen) and use it on the caged lusus
– select the cornucopia lookin things in the beehive
– choose a horn type, then do the dance for the lusus again
– play the game and try not to suck
– leave the house and enter the forest on the far right
– use the ticket machine
– go to the right and enter the platform
(there are multiple ways you can get the needed ticket; this is just the one i chose)
– talk to the one with the similar sign color as joey, chixie
– talk to her again
– now talk to the blue girl, elwurd
– talk to her again
– talk to chixie
– after your chat with her, tell xefros you want to talk her out of it
– talk to elwurd again and tell her chixie’s secret
– talk to chixie with elwurd
– after chixie leaves, do business with elwurd
– relinquish the pogs D:
– click the gate and select “wait”
– talk to the custodian on the far right and ask him to move
– talk to the zookeeper on the far left and ask her what’s wrong
– go back to the custodian and exit the car
– talk to the guy with the big backpack and passenger
– walk down the car until cirava stops you, dialogue options don’t matter
– talk to the troll with the bandages, polypa
– go back and talk to the backpack trolls about stopping the fight
– talk to the bandaged troll again about the same topic
– go to the end of the car and select “stop”
– be polite
– tell them you aren’t giving up
– click one and select “strife”
– tap dance on ’em with joey
– leave the car
(there are multiple ways to get through this trial. personally, i think this method isn’t as good but hey, it gets you through)

– try to leave the car
– talk to marvus, the purple clown guy
– talk to tyzias, the one with the notebook. make sure to go through all the dialogue options so you understand whats going on!
– from left to right, talk to all the trolls in the car. make sure to go through all dialogue options!
– go look at the grub in the bathroom (top right of the room, looks like a security camera)
– try to open the lockers on the left side of the room
– talk to the leader bronya, (the troll to the left of marvus the clown) and get the key to the lockers
– rummage through all the bags in the open-able lockers
– talk to sword guy (to the right of marvus) and go through all dialogue options
– use the file you got from one of the bags on the security grub in the bathroom
– talk to the guy who mentioned the grub (farthest right of the teal trolls)
– talk to bronya again
– talk to grub guy again and give him the spice ( DD: )
– talk to tyzias and start the trial
– call tirona to the stand (the little girl who’s icon is in the top row in the middle column)

—— from this point on in the trial, you will have the option to “press” on certain statements indicated by the dots on the right side of the screen above the text box. you also have the opportunity to “present” items on these statements as well. for example, “press 3” would mean click either the text box or the arrows on either side of the text box until the third dot is illuminated, then selecting “press”. a statement like “present h2d magazine on 3” would mean to navigate to the third statement through the previously mentioned actions and selecting the “present” button, then clicking on the “h2d magazine” item, and finally selecting the green “present” button.

– walk to the right until you see the elevator, then go up it
– try to leave the car to the right
– after you are stopped by the blue tie guy, go back down the elevator and talk to the guy on the computer to the immediate left who’s name is mallek
– take his dead device and go to the yellow car. use the device on the backpack guy to charge it
– Take it back to mallek, who will send the literature to your tablet
– go back to blue tie man and listen to his ramblings. or don’t
– after you are told you need art by the blue girl with the stained dress, go back down the elevator and talk to remele, the person at the table with elwurd from the station
– after her request for “raw materials”, go back to the red car on the train, talk to the custodian, and take the garbage from him
– bring the garbage to remele who will give you a statue
– bring the statue to stained dress girl
– after the muscly blueblood tells you to get a costume, go down the elevator and talk to elwurd
– talk to her again, and select the “i’ll get back you you on that” option
– go talk to the spider lady in the far right of the room, past the elevator, and say you’ll go into her bedroom
– after elwurd saves you and you get the pirate costume go talk to the muscly lady again
– get your ♥♥♥♥ rocked and head to the next car
– play wheel of fortune with the clowns
– head to the yellow car and take a picture of the sleeping one-eyed person
– go back to the clown car and show the picture to marvus
– after he spins the wheel head to the green car
– talk to sword guy and get the knife from him
– take the knife to elwurd and get it painted up
– bring the knife to marvus
– after the final spin, head to the red car and walk to the zookeeper lady, or until joey notices there is no soda in the car
– head back to the clown car 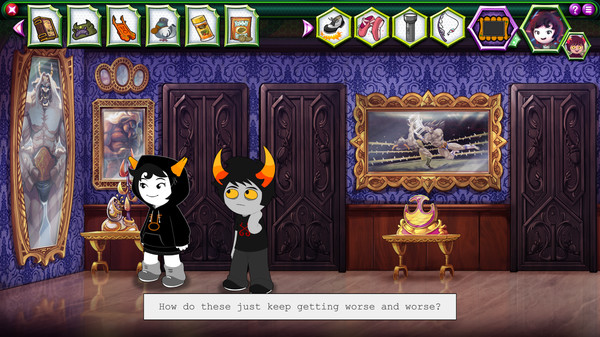 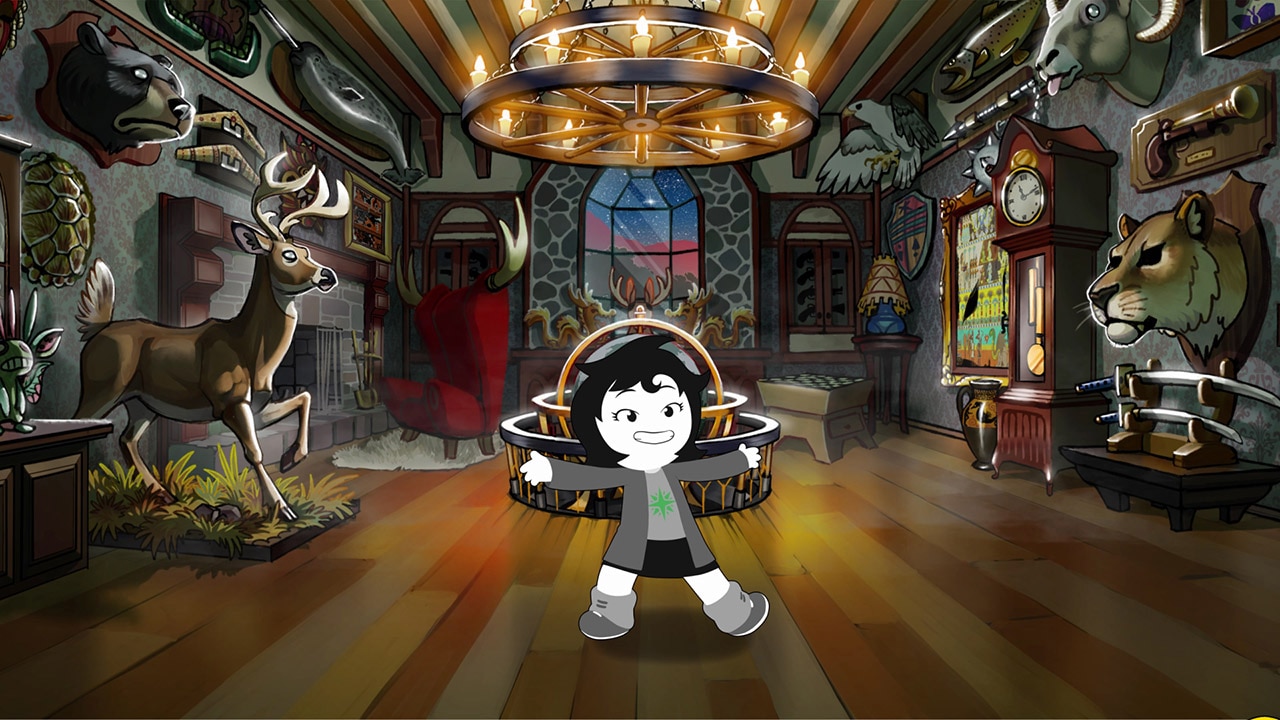