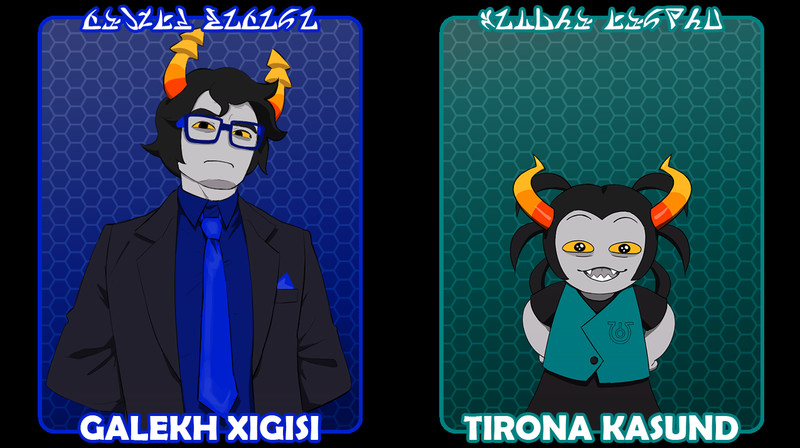 Hiveswap is an upcoming episodicadventure game developed by What Pumpkin Games and overseen by Andrew Hussie and Cohen Edenfield. Based in the universe of Hussie's MS Paint AdventureswebcomicHomestuck, it focuses on a girl who is accidentally transported to the planet of Alternia—home of the troll species seen in Homestuck. It is the first of two games, with a planned sequel, and future installment titled Hauntswitch featuring a male troll named Dammek who was swapped onto Earth in her place.

The game was the subject of a crowdfunding campaign on Kickstarter, raising over US$2.4 million in funding. While development initially began with developers The Odd Gentlemen, it was eventually moved back in-house under What Pumpkin's own newly formed game development studio.

Act 1 was slated for release in mid-2015; however, this release date was postponed until January 2017. It was further delayed in January to an unspecified date.[4] On September 14, 2017, What Pumpkin Studios released Act 1. This was the release date previously announced on August 29, 2017, accompanied by a new trailer.[2] 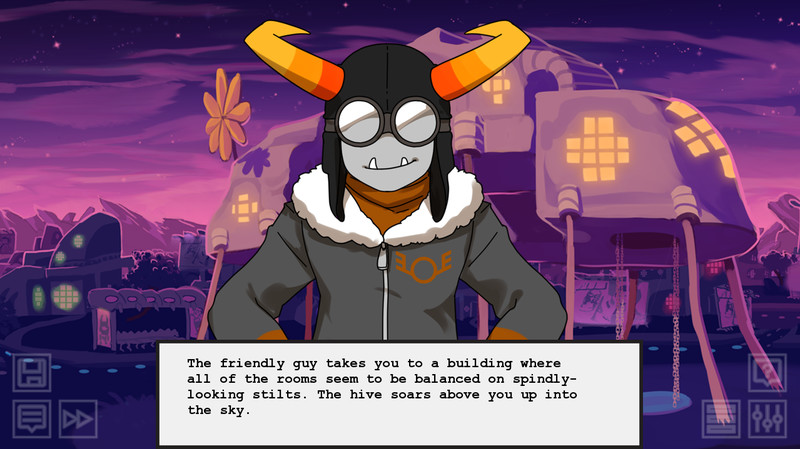 Two acts of Hiveswap were in development and currently has no release dates.

Hiveswap tells the story of a human girl named Joey Claire, who gets swapped with a troll boy named Dammek from the planet Alternia, as she tries to get back to Earth. A second game, Hauntswitch, will feature Dammek's adventures on Earth.[6] While set in the same universe as the Homestuck comic, Hiveswap and the sequel exist in a separate storyline with only 'loose relation' to the comic, and involve a new cast of characters.[7]

At the time the article went to print, the Kickstarter had been running for just over one day. The game reached the full $700,000 of funding in fewer than 32 hours.[11] The campaign also reached certain 'stretch goal' amounts, whereupon Hussie added Mac and Linux support onto the proposed game.[12]Digital Trends writer Graeme McMillan commented that the campaign was approaching, at the time, the record for most successful comics-related Kickstarter campaign, whose previous record was held by the Order of the Stick campaign with $1,254,120.[13] The Kickstarter eventually raised $2,485,506, making it the 'fifth game on Kickstarter to pull in a full seven figures' and the third highest funded video game in Kickstarter history at the time. An additional PayPal-based fundraiser was created to accommodate those who could not donate via Kickstarter's available methods.[8][14][15]

In December 2013, new details, a projected release date of June 2014, and concept art were posted on the game's Kickstarter blog. In the post, Hussie revealed that the game would effectively be a spin-off from the comic, with a new plot and characters that will only have loose ties to the original storyline, making it more accessible to those who are unfamiliar with the original story. Hussie also indicated that the game will not include any voice acting; he considered voice acting 'too easy to do badly', and stated that he was 'personally not that big on VA in games like this anyway'.[7] On June 21, 2014, it was publicly announced that the game would be developed by The Odd Gentlemen—known for their game The Misadventures of P.B. Winterbottom. New concept art, including that of another new character, were also revealed.[16]

In an interview with Game Informer show, Undertale developer Toby Fox, who has worked with Hussie in the past, announced that he was contacted to write music for 'the Homestuck video game'.[17]

On October 30, 2014, it was announced that the game's official title would be Hiveswap, and that production of the game had been taken back in-house 'alarmingly well' under Hussie's What Pumpkin studio. It was also announced that the game would be the first of two distinct stories: each will be an episodic story, but there will be parallels between them, and they can be played in either order.[6]

On December 26, 2015, updates were posted on the project's Kickstarter page stating that the game was going to be using a 2D system rather than using the 3D graphics shown in the teaser trailer, asset reel, and other footage. It is stated that this is 'to make things a little more cost-efficient, and more rapidly producible over the full span of the series'.[18]

On October 6, 2016, a teaser trailer was released showcasing the game's changes to the 2D system and other various elements of the game, including combat and interactive objects.[19] A release date for the first act was set to January 2017, but was delayed for a non-specific number of weeks.[4] The game was greenlit on Steam on December 15, 2016, and showcased a number of in-game screenshots.[20] On April 13, 2017 (Homestuck's 8th anniversary), another trailer for the game was released, this time showing parts of Alternia as well as more gameplay.[21]

Promotion for Act 2 includes the 'Troll Call,' a feature of troll characters slated to appear in the installment,[22] and the 'Extended Zodiac', a feature of 288 symbols, including the original astrological signs as used by Homestuck characters, as well as symbols used by Hiveswap characters, complemented by a personality quiz to determine the quiz taker's Extended Zodiac sign.[23] The characters from the Troll Call were later featured in a spinoff video game called Hiveswap Friendship Simulator. Starting on September 4, 2019, a sequel to Hiveswap Friendship Simulator called Pesterquest began. The story picks up where Hiveswap Friendship Simulator ended and it follows MSPA Reader (the playable character) as they interact with the kids and the trolls from the original webcomic Homestuck, such as John Egbert and Karkat Vantas.

On October 25, 2020, another teaser was released revealing that Hiveswap: Act 2 would be released in November 2020. Three weeks after that, on November 16, 2020, a gameplay trailer was livestreamed revealing a release date of November 25, 2020. 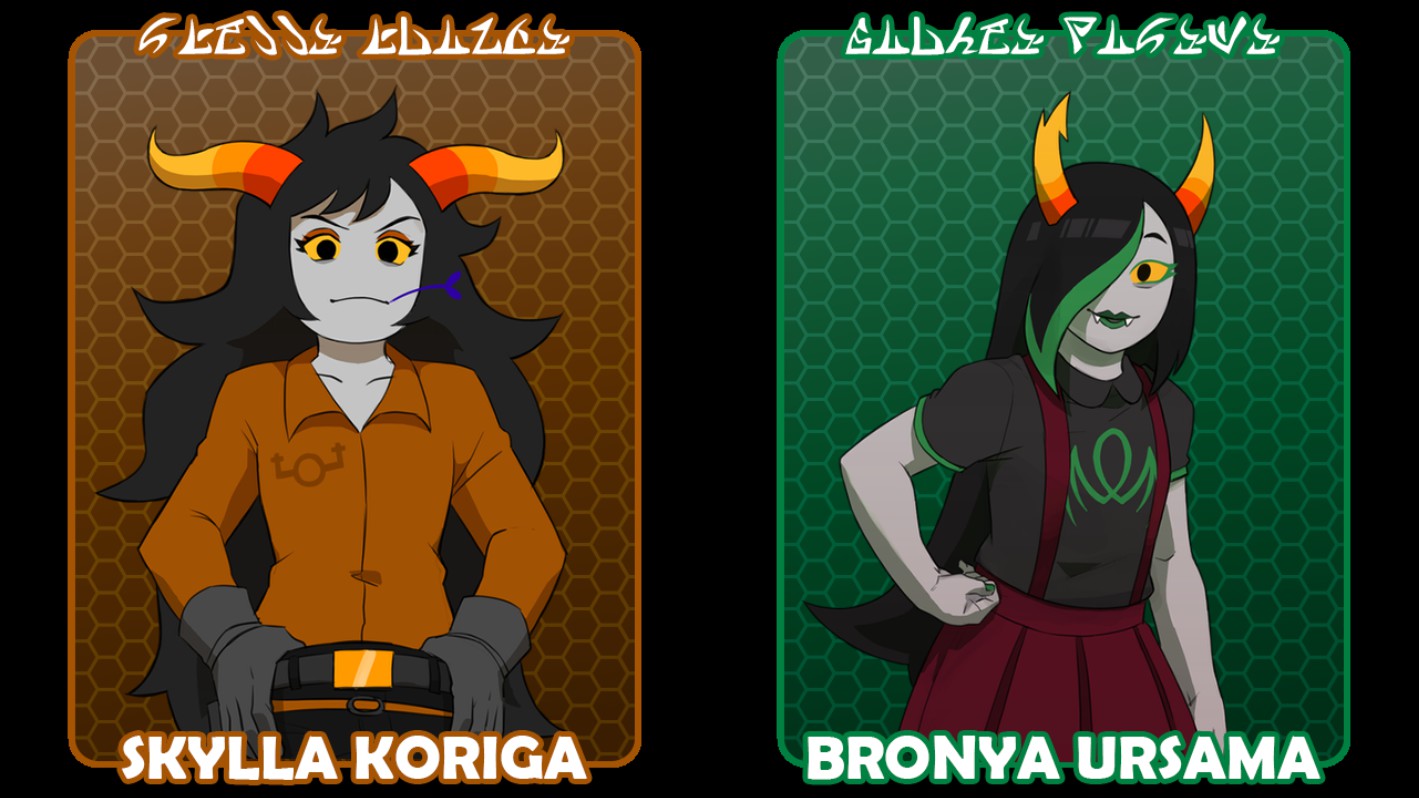 I know you’reall just dying to find out who’s gonna be featured – but die no longer! live,and live happy, because here they are:

first up, we have AZDAJA KNELAX! I think a lot of people whosaw the volume title guessed this one, and good work! you got it right. you’re officially geniuses. I said so which makes it true

this bad boy is one partKaiba, one part Vegeta, and all parts insufferable, so I’m sure you can’t waitto meet Konyyl’s partner in crime. his route’s a fun one! you might even saythe fun levels are over—well, you know.

and then of course, our other troll is… 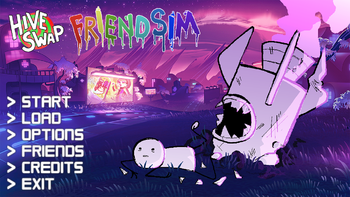 AMISI—huh?? hang on a second. what’s this new horseshit???Amisia already got a route! blueblood or not, nobody has the right to hog all theFriendsim screentime like this. we’ve got like, what, 20-ish more trolls to getthrough? come ON. but then again, who am I to argue with the girl holding agiant hatchet? I’ll let this one slide for now, but you’re on THIN ICE, Erdehn

you can befriend AZDAJA and AMISIA(???) in Friendsim Vol. 9when it launches TOMORROW, August 3rd!! a bunch of the team is busy thatmorning so we’re shooting for a 5 PM PST launch. see you then!