Video Game Description: In Kawaii Deathu Desu, supernatural beings find themselves incarnated as cute japanese idols! Pick a supernatural idol and beat the hell out of - no pun intended - as many overzealous fans as you can in this addictive beat'em up as you work your way up to claim the throne of the underworld!
Genre: Action, Beat-'Em-Up, 2D
Publisher: EastAsiaSoft
Developer: Top Hat Studios Inc, Pippin Games
Rating: T for Teen (Blood, Violence)
'The Entertainment Factor is supported by its audience. When you buy through links on our site, we may earn an affiliate commission.'

Kawaii Deathu Desu is a start. Developed by Pippin Games and Top Hat Studios, KDD (as it’s affectionately referred to in-game) is a fast-paced beat’em up button masher in the vein of One Finger Death Punch. Nine adorable supernatural beings have found themselves incarnated as Japanese idols, and have decided the best way to lay claim to the throne of the underworld is to kill as many of their fans as possible. Kawaii Deathu Desu is a 2D Beat 'em up game from Pippin Games. Supernatural beings incarnated as cute Japanese idols collect souls from their fans.

Find out more about this video game after the jump.

Click the links below to jump directly
to the selected section: 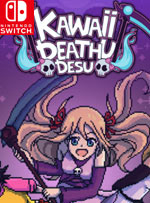