What’s this? What’s this? A roundup of everyone who’s covered The Nightmare Before Christmas songs? It’s exactly what you need in your life to prep for Halloween, regardless if you’re still figuring out your Halloween costume—or never changed out of the one from last year. So, if you’ve ever been curious if your favorite The Nightmare Before Christmas songs have been made into covers that you can oogie boogie to, we’ve got the list right here. Luckily for you, Walt Disney Records has released two albums chock full of covers as well!

Panic! At the Disco – “This is Halloween”

Can Brendon Urie and the rest of this band do anything wrong? Clearly not, with this perfectly pop-punk version of Halloween Town’s anthem. It’s the perfect intro to rocking on with the rest of the film’s soundtrack.

The popular lead singer of Evanescence fame lends the perfect vocals to this wailing song to completely surround your soul and shake you to your bones. Her take starts off slow and haunting and gradually builds into a crescendo. Bonus points for Amy playing both her harp and piano on the track!

Fiona Apple’s version appeared on the 2006 re-release bonus disc of The Nightmare Before Christmas and gives a completely different feel to the song than Amy’s, though both are completely great. A little more upbeat from the start, it has a bit of a playful and dance-y feel.

This special song got the star treatment from not just one or two, but three amazing ladies! This magical movie maven covered the song live at Royal Albert Hall in London back in 2013 and was an absolute doll while doing it.

For more of a head-banging tune, blast Korn’s version of this devious ditty from the Nightmare Revisited album. It’s mischievous, metal, and marvelous all at once.

Poor Jack, but lucky us that we get to hear this wonderful rendition on Nightmare Revisited. It’s simple and stripped down, but still perfectly powerful.

This is a wonderfully theatrical take on this sad tune about Jack longing for more. We highly recommend crawling around your favorite happy haunt and reciting monologues on hills to this one.

Make Christmas hardcore with Rise Against’s rallying cry—it’s the perfect background music to decking the halls this season. The bellowing laugh in the middle of the song is a must when singing it aloud.

When we heard that one of our favorite emo pop bands (we couldn’t stop blasting “Immortals” after watching Big Hero 6) did a The Nightmare Before Christmas cover, we immediately sat down and gave it our full attention. Thumbs up to these pop punk-in kings.

Another alternative rock track on Nightmare Revisited, it’s a bit darker and more melancholy than Fall Out Boy’s take, but definitely suits a spooky mood.

In contrast to Amy Lee’s cover of “Sally’s Song,” this rendition starts out frenzied and loud, then slowly mellows out at about the minute mark, to more synth and more harmonizing.

Bonus: Nick Pitera – “This is Halloween”

That’s right—a few years ago we got the YouTube singer extraordinaire to do a chilling one-man acapella cover of “This is Halloween.” For what’s better than a single vocal to get us in the mood for Halloween? Nine of ‘em!

Bonus bonus: The Nightmare Before Christmas reference in Blink-182’s “I Miss You”

We’d be remiss if we didn’t mention this classic tune. Although not technically a cover, this alt rock anthem references “[living] like Jack and Sally” and “having Halloween on Christmas” (yes to both of those things). 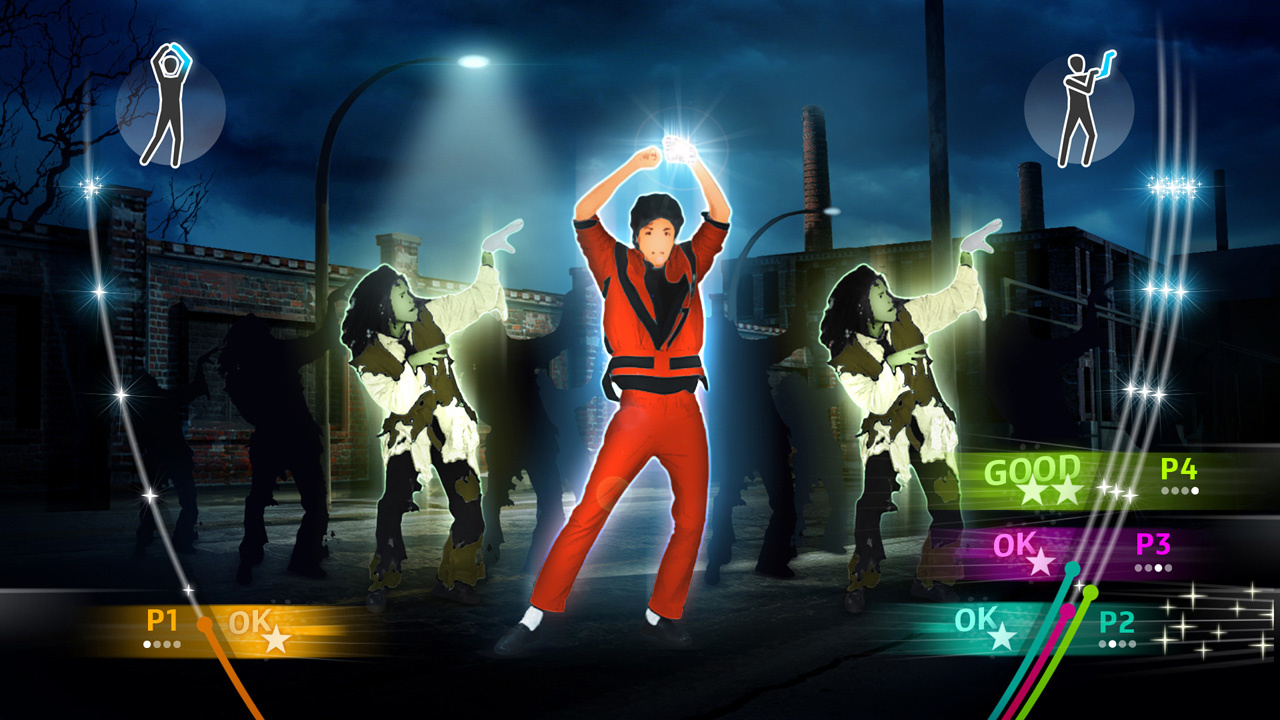 For a few more delightful and frightful The Nightmare Before Christmas covers you can check out the entire Nightmare Revisited album here as well as the Special Edition reissue of the film soundtrack here.

What’s your favorite rendition of a The Nightmare Before Christmas song? Let us know in the comments!

Catch The Nightmare Before Christmas on Freeform on October 29, at 7 a.m.

High school is a nightmare in its own right with teenagers, hormones and homework that makes for a deadly cocktail. This is especially true if you’re not among the popular kids. However things can still get much worse as you might get stalked by a relentless serial killer. If this makes you nostalgic for a good slasher movie such as Scream, Halloween and A Nightmare on Elm Street, then keep on reading.

The easiest way to explain the story of Last Year: The Nightmare is to compare it to one of the many slasher horror movies of the 90s as the aforementioned Scream, Halloween, A Nightmare on Elm Street and many others. The premise is that a group of teenagers, five in this case, are being chased by a serial killer. The teenagers follow the pattern of strong stereotypes: Chad the quarterback, Nick the nerd, Amber the prom queen, Troy the cool kid and Sam the geek. On the other end of the spectrum we have three serial killers with very descriptive names: Giant, Strangler and Slasher. Not much can be said about them except that they are or act exactly as there name states. The only bit of story can be found at the start of each map in the form of a small clip in which the teenagers explain their escape plan. Beyond that there is no real story or character development. The origin of the serial killers is also kept very vague. Not that this has ever stopped a game or movie from being successful so no points are deducted for this.

The graphics look great as the characters and their stereotypes are well recognizable, even from a distance. The serial killers are all distinct looking and scary. It is clear that a lot of effort was put into creating some memorable bad guys. Same goes for the environments and level design with plenty of dark places and corners where death could be lurking. The death scenes are also rather elaborate as you don’t just drop dead to the floor but you get chopped into pieces, gutted or skull smashed in a way that would make a certain Game of Thrones character jealous. Last Year: The Nightmare has a soundtrack that gives you the chills. The sound matches the atmosphere of the game really well, serving its purpose to get your blood pumping. There is a mixture of electronic sounds and regular environmental high school sounds, making it hard to say which is scarier.

Last Year: The Nightmare is a 5 vs 1 multiplayer asymmetrical action game. On one side of the ring we have five teenagers and on the other side one serial killer. The game is basically a cat and mouse game, either the cat kills the mouse or the mouse gets away. The only way for the teenagers to win the game is by opening the exit gate and going through it before it closes again permanently. The game is on a timer so the matches don’t drag out endlessly, because that would be a real nightmare. Reaching the exit however is not an easy task because several obstacles are blocking the way. Luckily for the teenagers they have a plan. Each of the currently three available maps has a very specific plan. This more often than not involves finding items scattered around the map to open several locked doors.

If you play as a teenager you will get one of the five characters assigned to you randomly . You might not be able to pick the character itself but you sure can choose which class you play. There are four classes to choose from: assault, medic, scout, and technician. The character that was assigned to you is not a restriction to which classes you can be, you can be the assault nerd or the quarterback technician if you want to be. Each class does however have a limit to how many players can pick that class at any given time. As in any other game with classes each class has its own strengths and weaknesses and a different loadout. Each class starts with a few basic items but you can find crafting materials to upgrade existing tools or create new ones. This is technically not necessary to win but it might just make your life a lot easier. In total there are twelve items in the game, divided in defensive and offensive items. To craft items you must first find crafting materials that are scattered around the map and are stored in various containers.

There is always a tradeoff, if you want to find more crafting materials you will need to wander the map a little more, which not only makes you vulnerable but it takes time away from completing the main objectives. It’s more a when you get killed then an if you get killed, as long as there is one more active survivor you will respawn in a locked room, the only way you can rejoin the game is when someone opens the door for you. This gives the teenagers a little more chance to win.

If you get to play as the serial killer your only task is to run around the map killing everyone in sight and making sure no one reaches the exit gate alive. As you are outnumbered you get a couple of special abilities depending on which of the three serial killers you are. All three share the ability to quickly move around the map in stealth so they can jump into action in a moment’s notice. None of the serial killers is invincible and might be taken down by the teenagers if they work together. When this happens the player who struck the killing blow will switch places with the player who controlled the serial killer. The new serial killer will also adopt some new moves as to make things more interesting.

Last Year: The Nightmare is a fun multiplayer game. The graphics and sound all contribute to a great and scary experience. Both ends of the spectrum are fun to play and neither feels overpowered as long as you don’t try to go solo attack the Giant. That being said, much relies on the active community. Your experience may vary depending on the people you play with or how active the community remains after a couple of months. As a side note, this is also one of the first games available on Discord, so if you don’t find the game on the regular channels where you purchase your games, have a look at the new Discord store.

Evolution Board Game – Now available for Nintendo Switch!
Bohemia Interactive’s Vigor is out NOW on Playstation 4 and Playstation 5