Contains the Marquise De Cat, the Eyrie Dynasty, the Woodland Alliance, the Vagabond, the Fall Map, and the Winter Map. The nefarious Marquise de Cat has seized the great woodland, intent on harvesting its riches.

The Clockwork Expansion for Root allows players to square off against four fiendishly automated factions. Insert a faction to round out a low-player count game or team up for co-operative play! Compete against the:

This is not a stand alone product and requires a copy of Root to play.

Next week the battle for the wild wood kicks into gear with the Clockwork Expansion! Four fiendishly automated enemy factions bring new challenges to Root in a customizable alternative to the game’s AI! Can you overcome the mechanical menace and secure your right to rule the forest? 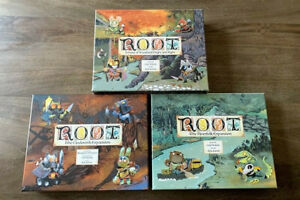 This is the simplest of the bots and can be used to fill out the player count in dozens of configurations. Though this bot is straightforward, don’t get complacent. At least one player will need to keep it in check!

The Electric Eyrie will inspire fear in the most stalwart of players. Like the Eyrie Dynasties, this bot can ramp up its action potential aggressively.

The Automated Alliance is especially zealous and will revolt frequently. Keep in mind their potential targets so you avoid any unpleasant surprises. Once they do establish a foothold, timing is critical. Don’t let them consolidate their warriors or you’ll be in trouble!

The Vagabot makes for a capricious friend or foe. Like a human player, he will reward those who craft items. But be careful, he can make for a dangerous enemy once he gets enough items to boost his maximum hits.

The Clockwork Expansion will be available in game for $5.99 on all platforms.

Get ready to fend off the mechanical menace when the Clockwork Expansion comes to Root!