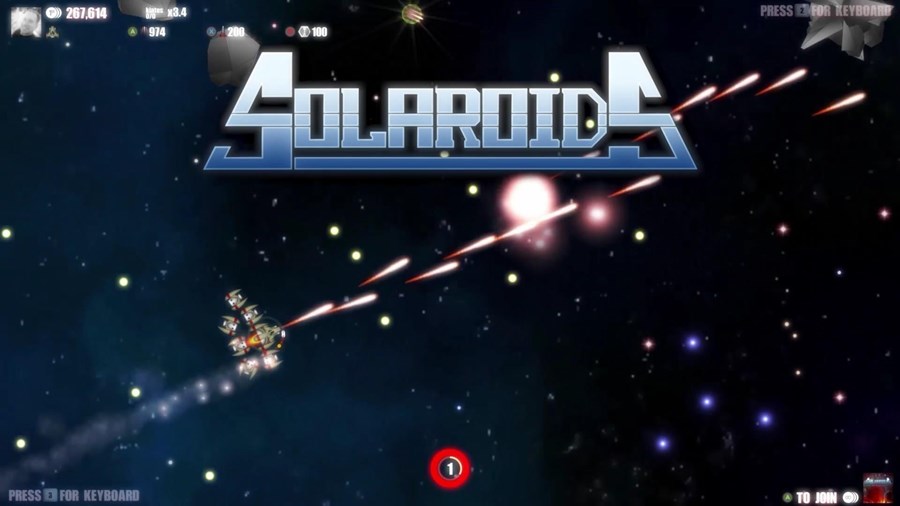 DynF/X Digital LLC respects the privacy of customers of its products and services and complies with applicable laws for the protection of your privacy. Welcome to Solaroids: Prologue. This twin-stick shooter strives to mix a few things, basically the twin-stickness of Asteroids with the power-ups of shmups like R-Type, along with an MMO-style.

When you’re ‘the last’ of something in a series or a group or anything, be it Airbender, Samurai, of Us1, or any other finality, you carry an incredible weight and hype on your metaphorical shoulders. This is it. There is nothing else to come. You’re the final act. And in realizing that realization, suddenly you’re expected to not only be good, but even be the best ‘the last’ thing to come along. With that knowledge, Solaroids: Prologue ($1.00) is the very last XBLIG, released about a month and a half after the official cutoff date.

Your initial thought is undoubtedly that it’s a space shooter, and you’d be correct. By its name, you’d surmise it’s a relative or close personal friend of the classic game Asteroids. And you would also be correct. You’re ‘2 for 2’ now. Then, you’d probably say it has a twin-stick control scheme. And… wrong. You were really close, man. It’s indeed a space shooter where you shoot larger asteroids and break them into smaller asteroids, where you (eventually) face down more sophisticated enemies, but if you want to follow the original source material, you’re going to need the ‘tank’ style turn controls, with the added benefit of forward and reverse thrusters to fine tune your fancy flight and trajectory. 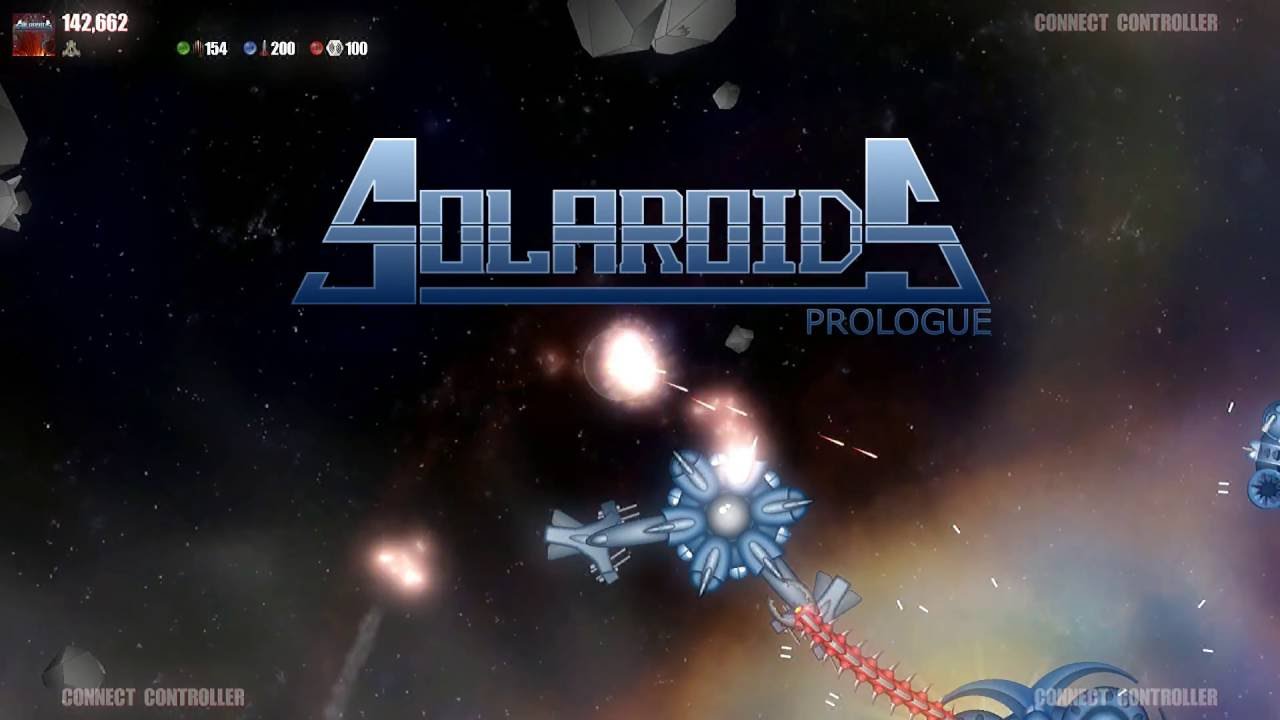 Gameplay is similarly classic, in that dull, ‘watching paint dry’ sort of fashion. In the way back when, Asteroids was exciting stuff, the pinnacle of videogaming. In the modern era, not so much. There’s a reason these ‘classics’ have turned into free browser games; they’re not that revolutionary or involving anymore. That’s not to dismiss or discredit these games for their contribution to history, just to state that their idea has been used dozens of times over.

To its credit, Solaroids: Prologue has a better graphic presentation, has power-ups (think shields, faster bullets, ship buddies for added firepower, etc.) and 4-player split screen2. The argument here is that the game is both more fun with and meant to be played with others, and that’s probably the case… if local multiplayer is an option for you. By yourself, the classic setup of chasing down asteroids hasn’t aged nearly as well. Especially when it requires you shoot so damn many of them to progress.

Enemies do show up the more you play, albeit gradually. Ditto for their size and intelligence and tactics, meaning you’ll eventually wander into some challenging firefights that will take full advantage of your acquired power-ups. In that regard, the game sheds its Asteroids origins. Yet with that being said, it’s still a generic and tame shooter, from the backgrounds to the gameplay and everything in between. As a ‘prologue’ to a perhaps bigger or more fleshed out endgame, you’d almost expect that. 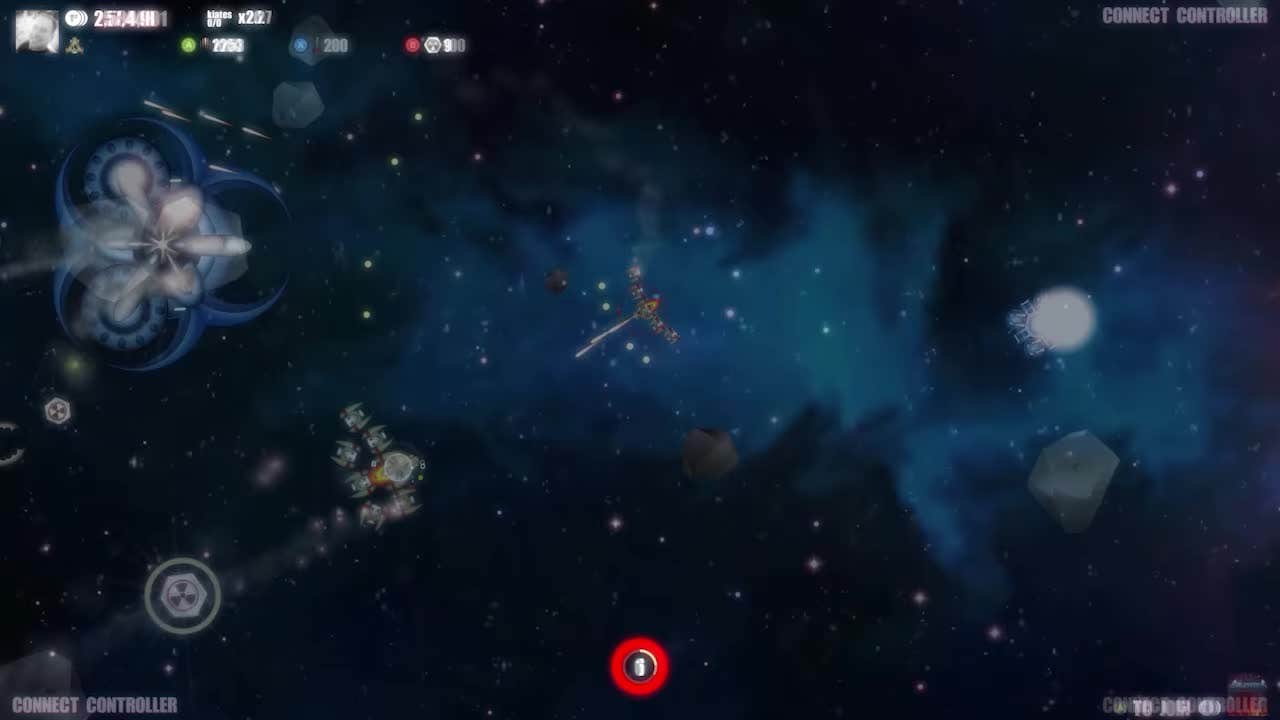 So while Solaroids: Prologue plays and controls well enough, it’s a space shooter that you’ve seen and played well before you’ve even seen and played it. It’s a slow burn to get to the more exciting battles, and even then, your patience isn’t going to necessarily be rewarded with anything beyond the ordinary. This is the last XBLIG, and the last space shooter you will play for XBLIG. Despite the sadness of that finality, this game won’t be greatly missed.