Star Wars: Dark Forces and Outlaws are two classic first-person shooters that have trouble running on modern-day hardware. However, PC gamers will soon be able to re-experience them as a team is currently working on a source port of the Jedi Engine, called The Force Engine.

The Force Engine is basically something similar to GZDoom. The project includes modern, built-in tools, such as a level editor and makes it easy to play Dark Forces and Outlaws on modern systems. Furthermore, it will support mods from the get-go.

Star Wars: Dark Forces is a first-person shooter computer game released on February 15, 1995, by LucasArts. The game introduces the character of Kyle Katarn, a former Imperial Stormtrooper and agent, now a mercenary for hire in the service of the Rebel Alliance. The Empire stretches its evil clutches across the galaxy, consuming planets with devastating results. Through many struggles, the Rebel Alliance has learned of a new Imperial battle station, the Death Star, with enough power to destroy an entire planet.

As the team noted:

“Playing Dark Forces or Outlaws using the Force Engine adds ease of use. It also adds modern features such as higher resolutions and modern control schemes such as mouse-look. Using the built-in tools allows for easier modding with more modern UI, greater flexibility and the ability to use enhancements made to the Jedi Engine for Outlaws in custom Dark Forces levels. Some of them are slopes, stacked sectors, per-sector color maps and more.”

As with GZDoom, PC gamers will need the original game data in order to play Dark Forces or Outlaws.

At launch, The Force Engine will come with three feature templates to make it easier to tune the experience. These three templates are: Classic, Retro and Modern.

Classic is a recreation of the original software renderer, controls and gameplay. This mode will provide the original experience as close as possible while still properly supporting modern systems. On the other hand, Retro is close to the original experience while being enhanced with modern controls and high resolution rendering. Both the “Classic” and Perspective renderers support pure software rendering and gpu based rendering. Lastly, Modern will feature some modern enhancements. Players can expect proper perspective rendering, enhanced texture filtering, mipmapping, widescreen and more.

Here are also the first screenshots for Dark Forces running on The Force Engine.

Enjoy and stay tuned for more! 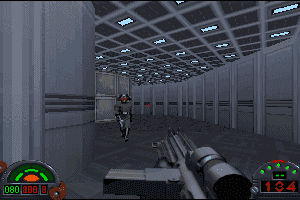 John is the founder and Editor in Chief at DSOGaming. He is a PC gaming fan and highly supports the modding and indie communities.Before creating DSOGaming, John worked on numerous gaming websites. While he is a die-hard PC gamer, his gaming roots can be found on consoles. John loved - and still does - the 16-bit consoles, and considers SNES to be one of the best consoles. Still, the PC platform won him over consoles. That was mainly due to 3DFX and its iconic dedicated 3D accelerator graphics card, Voodoo 2. John has also written a higher degree thesis on the 'The Evolution of PC graphics cards.' Contact: Email

Star Wars: Dark Forces is first-person shooter (single person only - no multiplay) that is halfway between the basic playability of Doom and the advanced playability of Duke Nukem 3D.

Making it work without the CD

Even if you choose full installation, the game still demands you to insert the CD every time you want to play. Luckily, it just does a simple file check. So here's how to bypass that check:

Now you can play the game without the CD!

This is a freeware demo that lets you play only the first 3 levels. Once you complete level 3, the 'next mission' button is just treated like the exit button (both display an ad for the full game before exiting).

D:DARKSEINSTALL.EXE has a special requirement. You must MOUNT the entire CD-ROM drive and only then 'CD' your way into it (in other words: you can't just directly mount DARKSE itself). Here is how to do it:

The game will run quite well in DOSBox, but there are two points to note:

(assuming your CD-ROM drive is D, of course)

Making it work without the CD

Now you can play the game without the CD!

Retrieved from 'https://www.dosbox.com/wiki/index.php?title=GAMES:Star_Wars:_Dark_Forces&oldid=134666'
Comments are closed.