The Yellow King is an Early Access massively-multiplayer online world with a dark horror theme and it's now available on Linux.

The Yellow King Roleplaying Game is a Tabletop RPG written by Robin Laws and published by Pelgrane Press in 2018, using a modified version of the GUMSHOE system. Inspired by Robert W. Chambers' short story collection The King in Yellow, it pits the characters, through multiple selves and timelines against the reality-altering horror of the eponymous play. Esther: Perhaps the most frustrating element of the finale, and maybe the show in general, was the fact that Pizzolatto laid out an entire mythology having to do with The Yellow King and Carcosa.

You can see some early footage from the developer below:

While in-development, it doesn't currently seem to have large and active player-base which is a shame as it looks like it could be a lot of fun when played with others. However, the overall user review score gives it quite a positive picture. Perhaps now it's on more platforms, they might start to see extra players trickle in. In the announcement, they mentioned they're quite a small team so they will continue to fix issues as they come up.

You can find The Yellow King on Steam.

The King in Yellow is a book of short stories by the American writer Robert W. Chambers, first published by F. Tennyson Neely in 1895.[2] The book is named after a play with the same title which recurs as a motif through some of the stories.[3] The first half of the book features highly esteemed weird stories, and the book has been described by critics such as E. F. Bleiler, S. T. Joshi and T. E. D. Klein as a classic in the field of the supernatural.[3][4] There are ten stories, the first four of which ('The Repairer of Reputations', 'The Mask', 'In the Court of the Dragon', and 'The Yellow Sign') mention The King in Yellow, a forbidden play which induces despair or madness in those who read it. 'The Yellow Sign' inspired a film of the same name released in 2001.

These stories are macabre in tone, centering, in keeping with the other tales, on characters who are often artists or decadents, inhabitants of the demi-monde.

The weird and macabre character gradually fades away during the remaining stories, and the last three are written in the romantic fiction style common to Chambers' later work. They are all linked to the preceding stories by their Parisian setting and their artistic protagonists.

Illustration of Tessie in 'The Yellow Sign', from a 1902 edition of the book

The stories in the book are:

The play called The King in Yellow[edit]

The fictional play The King in Yellow has at least two acts and at least three characters: Cassilda, Camilla and 'The Stranger,' who may or may not be the titular character.

Chambers' story collection excerpts some sections from the play to introduce the book as a whole, or individual stories. For example, 'Cassilda's Song' comes from Act 1, Scene 2 of the play:

Along the shore the cloud waves break,
The twin suns sink behind the lake,
The shadows lengthen
In Carcosa.
Strange is the night where black stars rise,
And strange moons circle through the skies,
But stranger still is
Lost Carcosa.
Songs that the Hyades shall sing,
Where flap the tatters of the King,
Must die unheard in
Dim Carcosa.
Song of my soul, my voice is dead,
Die thou, unsung, as tears unshed
Shall dry and die in
Lost Carcosa.[7]

The short story 'The Mask' is introduced by an excerpt from Act 1, Scene 2d:

Camilla: 'You, sir, should unmask.'
Stranger: 'Indeed?'
Cassilda: 'Indeed it's time. We have all laid aside disguise but you.'
Stranger: 'I wear no mask.'
Camilla: (Terrified, aside to Cassilda.) 'No mask? No mask!'[8]

It is also stated, in 'The Repairer of Reputations,' that the final moment of the first act involves the character Camilla's 'agonized scream and...awful words echoing through the dim streets of Carcosa.'[9]

All of the excerpts come from Act I. The stories describe Act I as quite ordinary, but reading Act II drives the reader mad with the 'irresistible' revealed truths. 'The very banality and innocence of the first act only allowed the blow to fall afterward with more awful effect.' Even seeing the first page of the second act is enough to draw the reader in: 'If I had not caught a glimpse of the opening words in the second act I should never have finished it [...]' ('The Repairer of Reputations').

Chambers usually gives only scattered hints of the contents of the full play, as in this extract from 'The Repairer of Reputations':

He mentioned the establishment of the Dynasty in Carcosa, the lakes which connected Hastur, Aldebaran and the mystery of the Hyades. He spoke of Cassilda and Camilla, and sounded the cloudy depths of Demhe, and the Lake of Hali. 'The scolloped tatters of the King in Yellow must hide Yhtill forever,' he muttered, but I do not believe Vance heard him. Then by degrees he led Vance along the ramifications of the Imperial family, to Uoht and Thale, from Naotalba and Phantom of Truth, to Aldones, and then tossing aside his manuscript and notes, he began the wonderful story of the Last King.

A similar passage occurs in 'The Yellow Sign', in which two protagonists have read The King in Yellow: 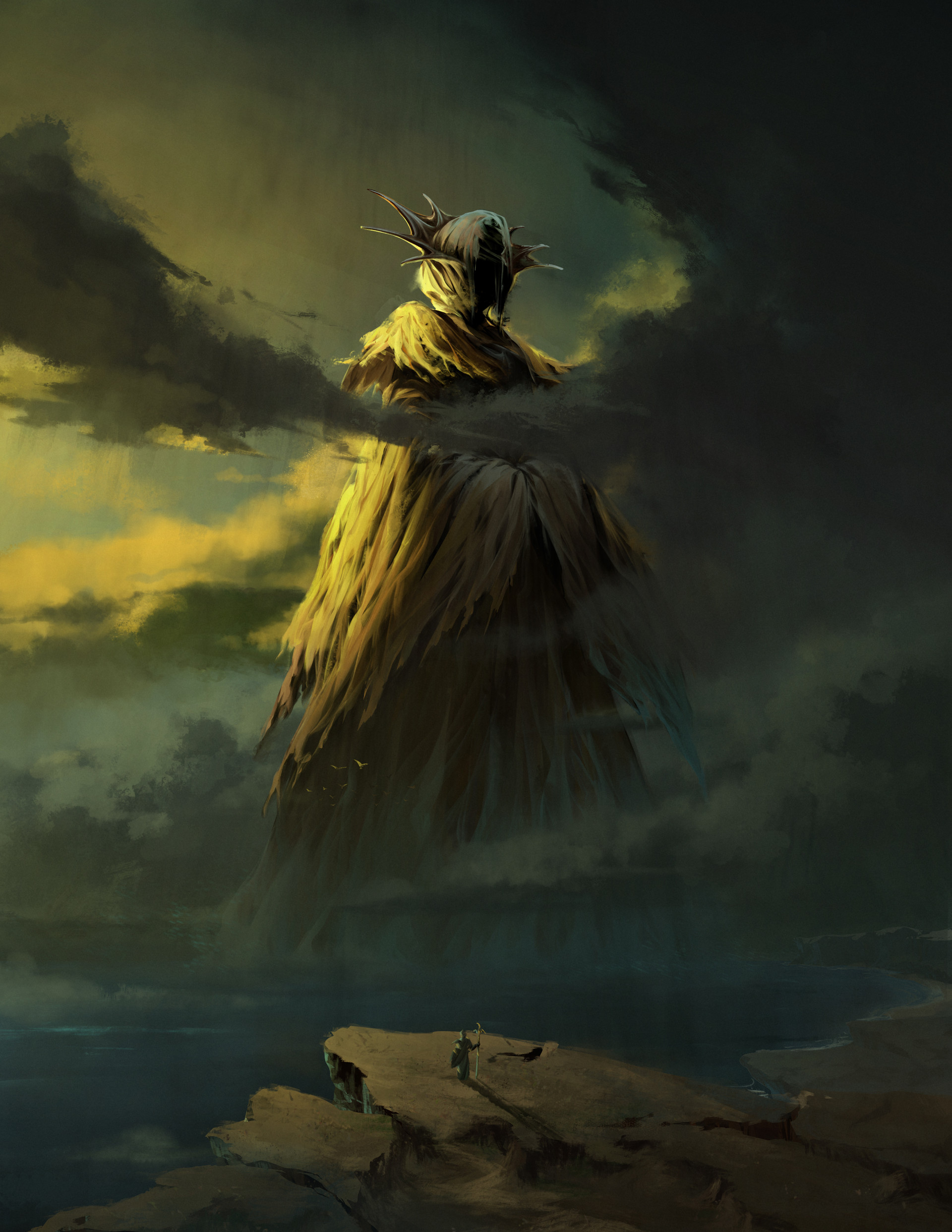 Night fell and the hours dragged on, but still we murmured to each other of the King and the Pallid Mask, and midnight sounded from the misty spires in the fog-wrapped city. We spoke of Hastur and of Cassilda, while outside the fog rolled against the blank window-panes as the cloud waves roll and break on the shores of Hali.

Chambers borrowed the names Carcosa, Hali and Hastur from Ambrose Bierce: specifically, his short stories 'An Inhabitant of Carcosa' and 'Haïta the Shepherd'. There is no strong indication that Chambers was influenced beyond liking the names. For example, Hastur is a god of shepherds in 'Haïta the Shepherd', but is implicitly a location in 'The Repairer of Reputations', listed alongside the Hyades and Aldebaran.[10]

Brian Stableford has pointed out that the story 'The Demoiselle d'Ys' was influenced by the stories of Théophile Gautier, such as 'Arria Marcella' (1852); both Gautier and Chambers' stories feature a love affair enabled by a supernatural time slip.[11]

The first season of HBO's True Detective television series revolves around a string of crimes committed by the elusive 'Yellow King' with Carcosa also being mentioned on numerous occasions. Black stars are also prominent in reference and imagery during the series.

The Yung Lean song 'Yellowman' references The King in Yellow, using the lyric 'I'll be your yellowman, Carcosa land.'

In his 1984 novel Thinner, Stephen King makes a passing reference to The King in Yellow, a head shop in the small (fictional) town of Fairview, Conn.

The Mask that the Stranger is instructed to remove but turns out not to exist at all in the excerpt from The King in Yellow play (in Chambers' short story 'The Mask') evokes the scene in Edgar Allan Poe's 'The Masque of the Red Death' where Prince Prospero demands that the stranger dressed as the Red Death should remove his mask and robes, only to find nothing underneath. Given the recognition of that short story, this might be an inspiration or even a tribute from Chambers to Poe.

Marion Zimmer Bradley drew a number of names from The King in Yellow for her Darkover series, including Hastur, Hali, Camilla, and Cassilda. Bradley mentioned Chambers as an influence in a 1980 interview.[12]

Swedish writer Anders Fager's short stories 'Miss Witt's Great Work of Art' and 'The Queen in Yellow' features the Stockholm-based 'The Carcosa Foundation' as it turns a performance artist ino an avatar of the Yellow King.

'The King in Yellow', illustration by Earl Geier in Richard Watts' scenario 'Tatterdemalion' for the Call of Cthulhurole-playing game published by Chaosium. The Yellow Sign adorning the back of the throne was designed by Kevin A. Ross for the scenario 'Tell Me, Have You Seen the Yellow Sign?'

H. P. Lovecraft read The King in Yellow in early 1927[13]and included passing references to various things and places from the book—such as the Lake of Hali and the Yellow Sign — in 'The Whisperer in Darkness' (1931),[14]one of his main Cthulhu Mythos stories. Lovecraft borrowed Chambers' method of only vaguely referring to supernatural events, entities, and places, thereby allowing his readers to imagine the horror for themselves. The play The King in Yellow effectively became another piece of occult literature in the Cthulhu Mythos alongside the Necronomicon and others.

In the story, Lovecraft linked the Yellow Sign to Hastur, but from his brief (and only) mention it is not clear what Lovecraft meant Hastur to be. August Derleth developed Hastur into a Great Old One in his controversial reworking of Lovecraft's universe, elaborating on this connection in his own mythos stories. In the writings of Derleth and a few other latter-day Cthulhu Mythos authors, the King in Yellow is an Avatar of Hastur, so named because of his appearance as a thin, floating man covered in tattered yellow robes.[citation needed]

In Lovecraft's cycle of horror sonnets, Fungi from Yuggoth, sonnet XXVII 'The Elder Pharos' mentions the last Elder One who lives alone talking to chaos via drums: 'The Thing, they whisper, wears a silken mask of yellow, whose queer folds appear to hide a face not of this earth...'.[15] This thing with a silken mask of yellow also features in The Dream-Quest of Unknown Kadath.

In the Call of Cthulhu roleplaying game published by Chaosium, the King in Yellow is an avatar of Hastur who uses his eponymous play to spread insanity among humans. He is described as a hunched figure clad in tattered, yellow rags, who wears a smooth and featureless 'Pallid Mask'. Removing the mask is a sanity-shattering experience; the King's face is described as 'inhuman eyes in a suppurating sea of stubby maggot-like mouths; liquescent flesh, tumorous and gelid, floating and reforming'.[attribution needed]

Although none of the characters in Chambers' book describe the plot of the play, Kevin Ross fabricated a plot for the play within the Call of Cthulhu mythos.[citation needed]

The Secret World, a Lovecraft-inspired massively multiplayer online role-playing game, quotes Cassilda's Song and other elements from The King in Yellow during a quest.

The theft of a supposed manuscript of the play The King in Yellow from the British Library forms a major plot element of Charles Stross's Lovecraft-inspired book The Annihilation Score.

In Alan Moore's comic series Providence, as well as in his previous story Neonomicon, Moore re-imagines the Lovecraftian mythos while referencing and borrowing heavily from The King in Yellow. The book is referenced by name throughout Providence, as well as referencing a fictional variation Sous Le Monde, French for 'Under the World.' In both Providence and its sequel, a recurring character named Johnny Carcosa appears as an avatar/speaker for a Lovecraftian entity, possibly Nyarlathotep or Azathoth.[16]

Game designer Robin D. Laws wrote a collection of Chambers-inspired stories entitled New Tales of the Yellow Sign after converting the story 'Repairer of Reputations' for Trail of Cthulhu. He subsequently wrote Yellow King Roleplaying Game that takes place in four Chambers-inspired 'realities', including Belle-epoque Paris, Chambers' fictional European war, the United States after the fall of the Castagne regime, and an apparently contemporary setting subject to subtle incursions from Carcosa.

Dan Abnett's novels The Magos, Pariah, and several connected short stories feature an ominous character called 'Grael Ochre, or the Yellow King,' whose nature is expected to be revealed in the last two parts of the Bequin trilogy (which began with Pariah.) These works are set in the Warhammer 40,000 universe, which has many Lovecraftian elements.

Retrieved from 'https://en.wikipedia.org/w/index.php?title=The_King_in_Yellow&oldid=993683256'
Comments are closed.